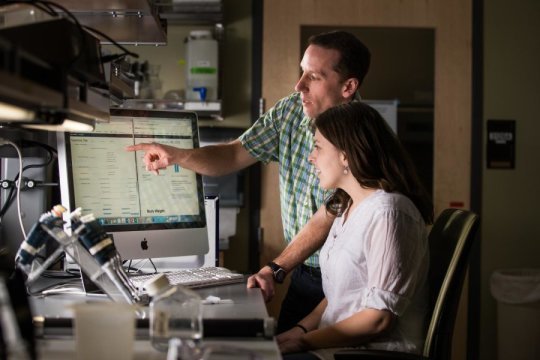 A group of Brigham Young University professors have found that giving students access to their personal biological data has a profound impact on their learning experience.

In a summary of their experiment, published in high-ranking scientific journal PLOS ONE, the researchers report students with access to data about their own microbiome — the trillions of tiny microorganisms that live in a person’s gut, mouth and skin — are significantly more engaged and more interested in course material.

“Whenever you can have students looking at something about themselves, it increases their desire to understand and also hopefully what they take away from the class,” said study coauthor Steve Johnson, professor of microbiology and molecular biology at BYU.

Microbiomes are influenced by diet and lifestyle, and are vital to a person’s health, as they can protect against disease. As scientists have learned more about their impact on our health, microbiomes have become an increasingly popular topic of study.

For their study, Johnson and fellow microbiology and molecular biology professor Scott Weber and colleagues monitored the attitudes of juniors and seniors from 400-level science courses. At the beginning of the semester, students were given the option to use their own personal information gained through a microbiome kit, or they could use demo data. Most students chose to use the kits.

Students took swabs of areas on their bodies (including their mouth, skin, gut and nose) and submitted the kits to the company uBiome to be tested. Once their microbiome data was sequenced, the students were able to log into an account and look at either the raw data, which they could use for further research, or the analysis given about their microbiomes.

“The data allow students to see which microbes are associated with certain body types or lifestyles and what percentage of those microbes they have,” Weber said. “It is helpful information because it lets students know what things they can do to take action. For example, the program may suggest eating more of one type of food to increase the presence of a particular helpful microbe.”

A survey was sent to the students before, during and after the microbiome unit to determine how and if their interest and engagement was affected. Students who analyzed their own microbiome data reported spending 31 percent more time researching the microbiome than students who used demo data. Students who used the kits also had increased confidence in their scientific reasoning ability and data interpretation skills and found the overall course significantly more interesting and engaging.

Josie Tueller, a college senior who participated in the study, said that using the microbiome kits made all of the class material more real and applicable.

“I felt more personally invested in learning about names of bacteria when I knew that things like Bacteroidetes and Akkermansia could be protective to my health,” Tueller said. “When we were learning about characteristics of bacteria, I could connect it to something I already knew about, instead of just random words.”

Weber and Johnson hope that finding more opportunities to apply these practices in other disciplines will further increase student engagement in science education and be an effective tool for inspiring life-long learning. Other BYU professors contributing to this study were Laura Bridgewater, Jamie Jensen, Donald Breakwell and Brent Nielsen.