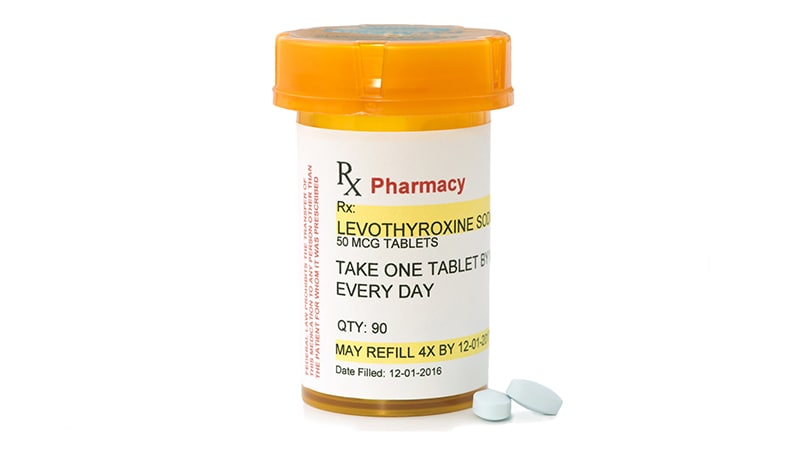 MONTREAL — Patients who discontinue levothyroxine for subclinical hypothyroidism may gravitate towards becoming mildly hypothyroid again, but they importantly show no differences in terms of symptoms and quality of life — and sometimes show even improvement — compared with those who continue treatment, new research shows.

With evidence showing widespread overtreatment with levothyroxine for a variety of reasons, “a discontinuation study like this is important to understand the true need for life-long thyroxine therapy,” commented James V. Hennessey, MD, director of clinical endocrinology at Beth Israel Deaconess Medical Center in Boston, Massachusetts, to Medscape Medical News.

Recommendations Against Levothyroxine for Subclinical Hypothyroidism

Subclinical hypothyroidism is commonly over-diagnosed, and treatment with thyroid hormone replacement, levothyroxine, has been shown to provide little, if any, benefit in terms of quality of life or relief of thyroid-related symptoms for these patients.

The treatment is meanwhile associated with burdens including cost and lifestyle adjustments, and one guideline panel recently issued a strong recommendation against routine levothyroxine use in most adults with subclinical hypothyroidism.

Nevertheless, levothyroxine treatment has soared in popularity and become one of the most commonly prescribed drugs in the United States.

With research lacking on one key solution of discontinuation of the therapy, Maraka, who is part of the Division of Endocrinology and Metabolism at the University of Arkansas for Medical Sciences in Little Rock, and colleagues conducted a double-blind, placebo-controlled trial at the Central Arkansas Veterans Healthcare System. In total, 50 patients treated for subclinical hypothyroidism were randomized 1:1 to continue receiving levothyroxine (25-75 µg daily) or to discontinue treatment and receive a placebo instead, with a planned 6-month follow-up.

In the current interim analysis, Maraka reported results for the first 40 patients, including 20 randomized to levothyroxine and 20 to discontinuation.

There were no significant differences between the discontinuation and levothyroxine groups at baseline, which were of a similar age (66.2 vs 70.8 years) and gender (75% women vs 85% men).

The groups had similar baseline thyroid-stimulating hormone (TSH) levels (3.0 vs 2.6 mIU/L), free T4 (both 0.9 ng/dL), thyroid peroxidase antibody positivity (17% vs 11%), and similar clinical symptoms. All patients had at least one elevated TSH reading prior to starting levothyroxine.

No Differences in Symptoms, Quality of Life Between Groups

Importantly, there were no significant differences between the discontinuation versus levothyroxine groups in terms of symptoms, and even some improvements with discontinuation, including Thyroid-Specific Quality of Life Patient-Reported Outcome (ThyPRO)-Hypothyroid Symptoms score (4.6 reduction vs 2.2 increase), tiredness (2.6 reduction vs 1.1 increase), and EuroQoL 5-Dimension Self-Report Questionnaire (EQ-5D) quality of life score, for which there were no differences between groups.

There were no reports of overt hypothyroidism; hyperthyroidism; cardiovascular events including atrial fibrillation, stroke, or heart failure; osteoporotic fractures; and deaths.

The finding that only about a third of patients who discontinued levothyroxine developed subclinical hypothyroidism was lower than expected, Maraka noted.

“This was…unexpected…for us,” she said. “We were expecting a larger number of patients to develop hypothyroidism, but to our surprise, that was not the case.”

“But what is more important is that there was no difference in the quality of life measures,” she added. “If anything, the placebo group was a little better, though the [differences] were not statistically significant.”

Makara also noted that in further research and a final 6-month analysis, the authors will look at factors associated with developing subclinical hypothyroidism after treatment discontinuation, among other issues.

Discontinuation of Levothyroxine Is Manageable

The results are encouraging as they provide assurance that discontinuation of levothyroxine is manageable.

“This research will pave the way for initiatives to promote levothyroxine deprescription and implementation of evidence-based care for patients with subclinical hypothyroidism,” she said.

In further comments, Hennessey noted the dilemma of having patients on levothyroxine who may not be benefitting from treatment is “significant,” with patients sometimes reluctant to discontinue treatment due to concerns of developing hypothyroidism-associated symptoms such as brain fog and weight gain.

He noted, however, that “many with mildly elevated TSH actually go on to normalize with time, so they are not really hypothyroid, [and] if we remove thyroxine from people with normal thyroid function, they will remain normal.”