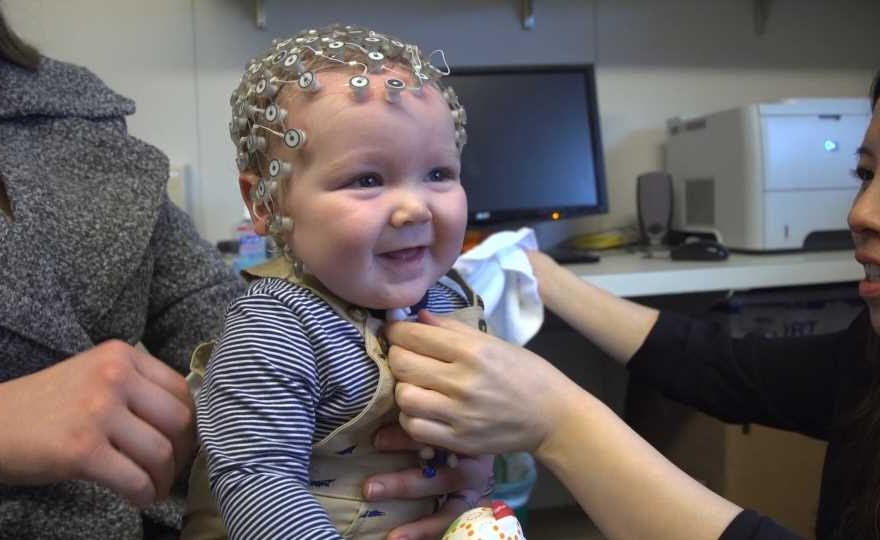 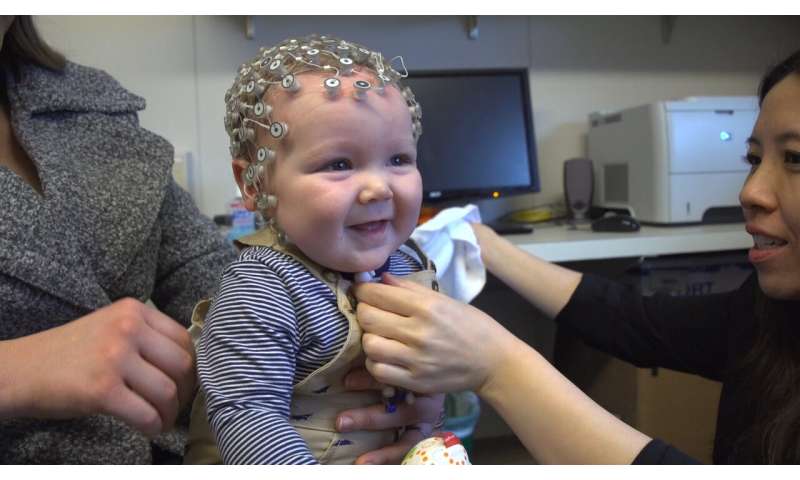 Infants spend most of their first year of life asleep. Those hours are prime time for brain development, when neural connections form and sensory memories are encoded.

But when sleep is disrupted, as occurs more often among children with autism, brain development may be affected, too. New research led by the University of Washington finds that sleep problems in a baby’s first 12 months may not only precede an autism diagnosis, but also may be associated with altered growth trajectory in a key part of the brain, the hippocampus.

In a study published May 7 in the American Journal of Psychiatry, researchers report that in a sample of more than 400 6- to 12-month-old infants, those who were later diagnosed with autism were more likely to have had difficulty falling asleep. This sleep difficulty was associated with altered growth trajectories in the hippocampus.

“The hippocampus is critical for learning and memory, and changes in the size of the hippocampus have been associated with poor sleep in adults and older children.

However, this is the first study we are aware of to find an association in infants as young as 6 months of age,” said lead author Kate MacDuffie, a postdoctoral researcher at the UW Autism Center.

As many as 80% of children with autism spectrum disorder have sleep problems, said Annette Estes, director of the UW Autism Center and senior author on the study. But much of the existing research, on infants with siblings who have autism, as well as the interventions designed to improve outcomes for children with autism, focus on behavior and cognition. With sleep such a critical need for children—and their parents—the researchers involved in the multicenter Infant Brain Imaging Study Network, or IBIS Network, believed there was more to be examined.

“In our clinical experience, parents have a lot of concerns about their children’s sleep, and in our work on early autism intervention, we observed that sleep problems were holding children and families back,” said Estes, who is also a UW professor of speech and hearing sciences.

Researchers launched the study, Estes said, because they had questions about how sleep and autism were related. Do sleep problems exacerbate the symptoms of autism? Or is it the other way around—that autism symptoms lead to sleep problems? Or something different altogether?

“It could be that altered sleep is part-and-parcel of autism for some children. One clue is that behavioral interventions to improve sleep don’t work for all children with autism, even when their parents are doing everything just right. This suggests that there may be a biological component to sleep problems for some children with autism,” Estes said.

To consider links among sleep, brain development and autism, researchers at the IBIS Network looked at MRI scans of 432 infants, surveyed parents about sleep patterns, and measured cognitive functioning using a standardized assessment. Researchers at four institutions—the UW, University of North Carolina at Chapel Hill, Washington University in St. Louis and the Children’s Hospital of Philadelphia—evaluated the children at 6, 12 and 24 months of age and surveyed parents about their child’s sleep, all as part of a longer questionnaire covering infant behavior. Sleep-specific questions addressed how long it took for the child to fall asleep or to fall back asleep if awakened in the middle of the night, for example.

A 2017 study by the IBIS Network found that infants who had an autistic older sibling and who also showed expanded cortical surface area at 6 and 12 months of age were more likely to be diagnosed with autism compared with infants without those indicators.

In the current study, 127 of the 432 infants were identified as “low risk” at the time the MRI scans were taken because they had no family history of autism. They later evaluated all the participants at 24 months of age to determine whether they had developed autism. Of the roughly 300 children originally considered “high familial risk,” 71 were diagnosed with autism spectrum disorder at that age.

Those results allowed researchers to re-examine previously collected longitudinal brain scans and behavioral data and identify some patterns. Problems with sleep were more common among the infants later diagnosed with autism spectrum disorder, as were larger hippocampi. No other subcortical brain structures were affected, including the amygdala, which is responsible for certain emotions and aspects of memory, or the thalamus, a signal transmitter from the spinal cord to the cerebral cortex.

The UW-led sleep study is the first to show links between hippocampal growth and sleep problems in infants who are later diagnosed with autism.

Other studies have found that “overgrowth” in different brain structures among infants who go on to develop those larger structures has been associated, at different stages of development, with social, language and behavioral aspects of autism.

While the UW sleep study found a pattern of larger hippocampal volume, and more frequent sleep problems, among infants who went on to be diagnosed with autism, what isn’t yet known is whether there is a causal relationship. Studying a broader range of sleep patterns in this population or of the hippocampus in particular may help determine why sleep difficulties are so prevalent and how they impact early development in children with autism spectrum disorder.

“Our findings are just the beginning—they place a spotlight on a certain period of development and a particular brain structure but leave many open questions to be explored in future research,” MacDuffie said.

A focus on early assessment and diagnosis prompted the UW Autism Center to establish an infant clinic in 2017. The clinic provides evaluations for infants and toddlers, along with psychologists and behavior analysts to create a treatment plan with clinic- and home-based activities—just as would happen with older children.

The UW Autism Center has evaluated sleep issues as part of both long-term research studies and in the clinical setting, as part of behavioral intervention.