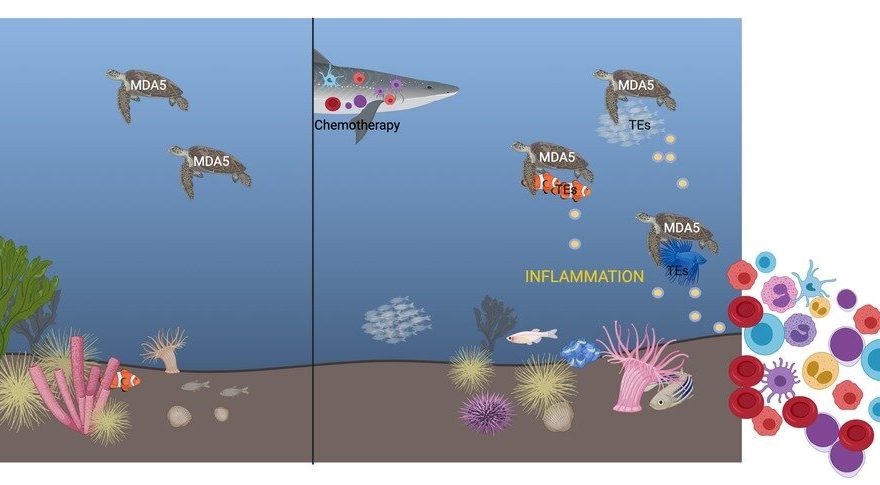 Chemotherapy is widely used to treat cancer patients. During the treatment, chemotherapeutic agents affect various biochemical processes to kill or reduce the growth of cancer cells, which divide uncontrollably in patients. However, the cell-damaging effect of chemotherapy affects cancer cells but also in principle many other cell types, including cycling blood cells. This puts the hematopoietic system under severe stress and pushes hematopoietic stem cells (HSCs) in the bone marrow to produce fresh cells and replenish the stable pool of differentiated blood cells in the body.

Researchers from the MPI of Immunobiology and Epigenetics, together with colleagues from the University of Freiburg, Lyon, Oxford, and St Jude Children’s Research Hospital in Memphis, now discovered that hematopoietic stem cells make use of RNA molecules from junk DNA sections to enhance their activation after chemotherapy.

Hematopoietic stem cells lie on the top of the hematopoietic hierarchy and can give rise to the majority of blood cells including immune cells. Under normal conditions, HSCs kept dormant in the bone marrow to preserve their long-term self-renewal potential and prevent stem cell exhaustion. However, upon chemotherapy, they are “forced” to exit quiescence and start cycling. “Hematopoietic stem cells respond to chemotherapy by starting proliferating. We know that inflammatory signaling is pivotal for HSC activation but we still don’t understand completely how this happens”, says Eirini Trompouki, group leader at the MPI of Immunobiology and Epigenetics in Freiburg.

A link between chemotherapy-induced inflammation and junk RNA

Interestingly, she and her team observed that other RNA molecules besides the RNAs of ‘classic’ coding genes are transcribed in HSCs after chemotherapy. A part of these RNAs stems from active or inactive transposable elements. Transposable elements are remnants of pathogens such as viruses or bacteria that have been integrated into the genome through millions of years of evolution. Researchers often considered these extensive strands of genetic material that dominate the human and mouse genome by more than one-third but seem to lack specific functions, as ‘junk DNA’.

Once the team noticed that RNA from these elements is increased after chemotherapy, the question then became: “Is there a link between transposable element RNA and the increased inflammatory signals observed after chemotherapy?” explains Thomas Clapes, lead author in the study. Indeed, HSCs express some receptors that could induce inflammation but they are primarily associated with immune cells and their role is to sense viral RNA. “We hypothesized that these receptors could also bind to transposable element RNA,” says Aikaterini Polyzou. The data of the scientists show that transposable element RNA can bind to the immune receptor MDA5 and trigger an inflammatory response that results in HSCs exiting quiescence and starting to proliferate. “Without these interactions, HSC activation becomes slower and less efficient. This indicates that RNA sensing is probably not necessary for hematopoietic regeneration but helps to enhance blood regeneration after chemotherapy,” say Clapes, Polyzou and Pia Prater.