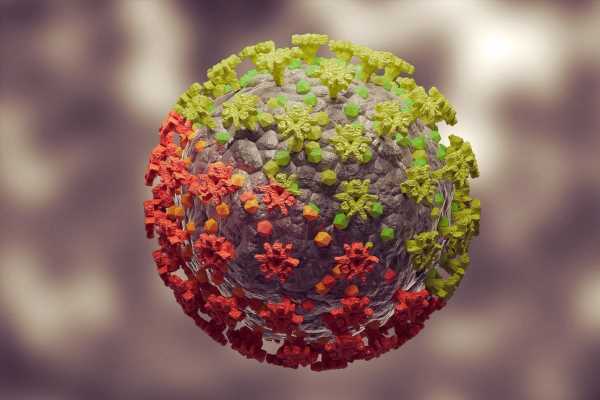 Coronavirus disease 2019 (COVID-19) vaccines have played a critical role in reducing transmission of the severe acute respiratory syndrome coronavirus 2 (SARS-CoV-2) transmission. However, with emerging reports of waning vaccine efficacy, there remains an urgent need to develop prophylactic measures against COVID-19. 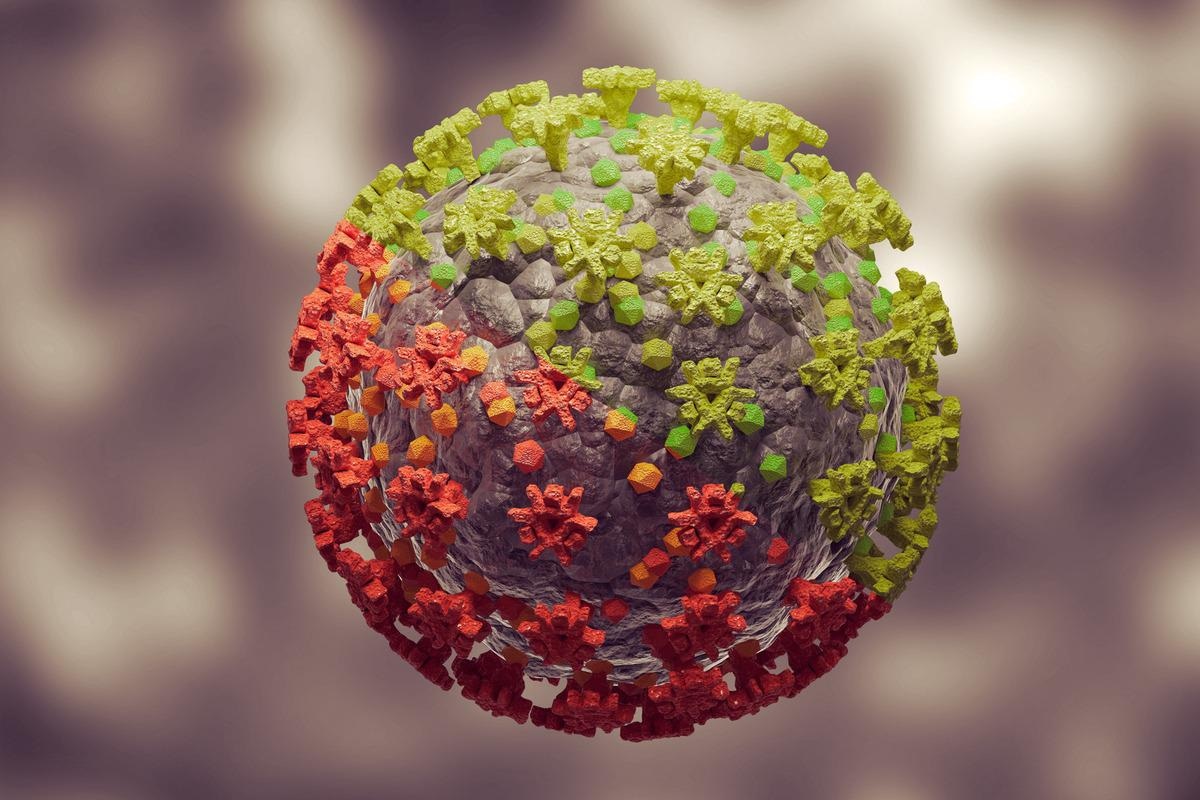 The team parsed the viral genome into a series of potential targets for short hairpin RNA (shRNA) by tilting the SARS-CoV-2 genome to shift each sequence away from each other by a single nucleotide (nt). Subsequently, several in silico filters were used to exclude target regions that had low synthesis fidelity, did not cross the minimal threshold of viral conservation, had sequential characteristics related to poor shRNA response, or a seed region that could match a human transcript.

The screening procedure involved two steps that reduced the impact of the positional variance. The first step involved genomic screening in a human Dicer 293FT cell line. The absence of Dicer cells prevented shRNA maturation and uncoupled the potency and expression of each shRNA. Furthermore small interfering RNA (siRNA) was used against Dicer cells to reduce its expression.

The RNA library was screened based on eight conditions of the destabilizing domain of Dicer cells (ddDicer). The first condition (T0) represented the absence of ddDicer and showed the relative abundance of several shRNAs. The remaining conditions described different doses of anti-Dicer siRNA. T0 unsorted shRNAs were further sequenced to characterize shRNA distribution in the initial library.

Furthermore, the team evaluated shRNA enrichment using DESeq2 in each condition as compared to T0. Internal controls were used to determine the optimal parameters that separated the hyper-potent shRNAs from the initial library. The area under the curve (AUC) was also evaluated to differentiate poorly potent controls from hyper-potent controls based on DESeq2 enrichment.

Three siRNA algorithms were used to predict the potency of the siRNAs against SARS-CoV-2. The most potent siRNAs were further retested at 100 pM and 500 pM concentrations. 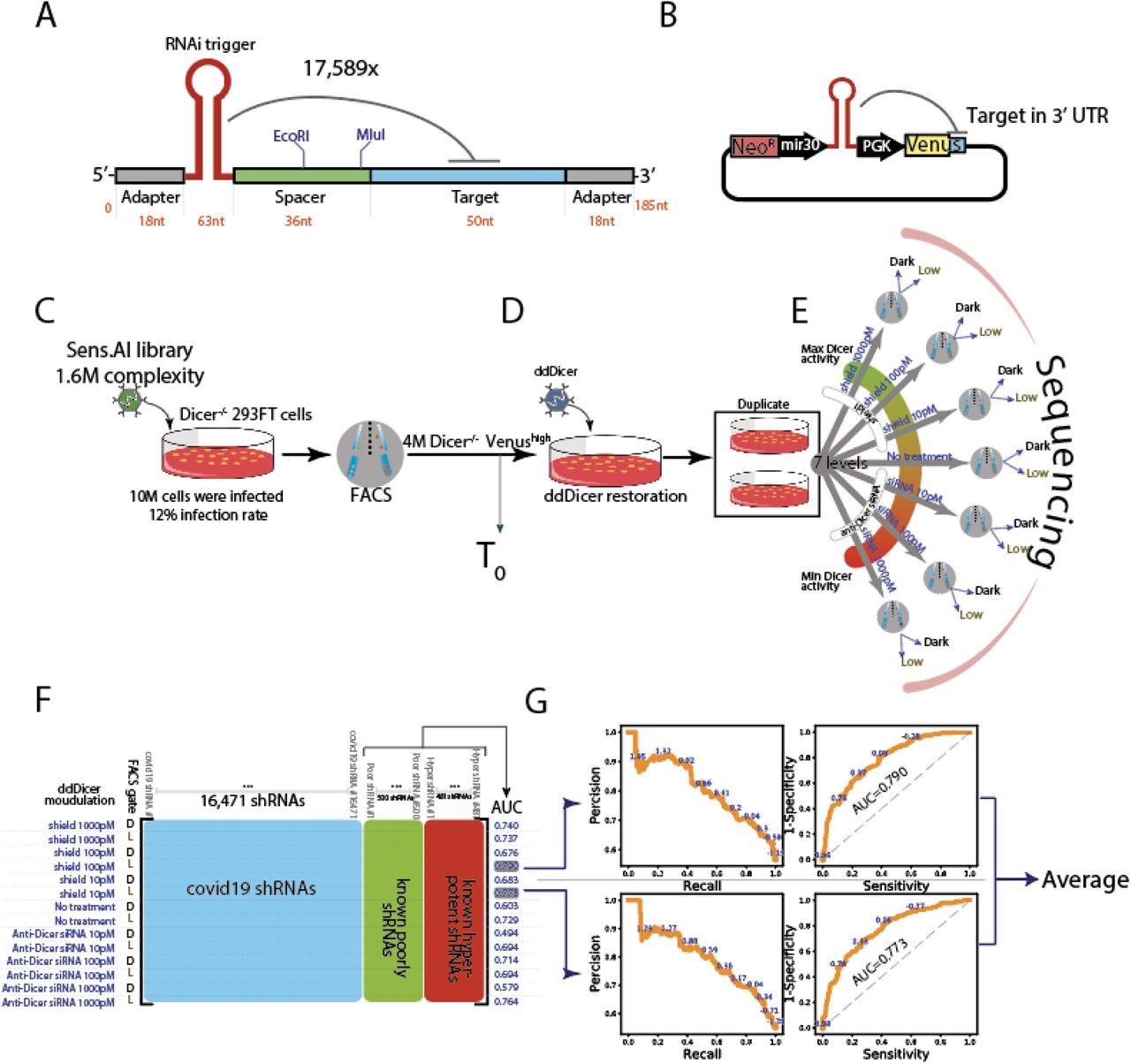 Genome wide screen of SARS-CoV-2 by Sens. AI (A) Oligo design. Each oligo had a unique RNAi trigger in the context of a miR-30 backbone along with a 50 nucleotide stretch from the viral genome that includes the RNAi target site (B) Library design. Each plasmid contained a specific RNAi trigger and its matching target-site in cis as part of the 3’UTR of a Venus reporter (C-E) Scheme of a screen in human cells (C) The RNAi machinery is turned off. Dicer-/- 293FT cells were infected by the plasmid library and sorted for Venushigh expression, which formed the T0read out (D) The RNAi machinery is turned on. We restored the RNAi machinery by ectopic expression of a destabilised Dicer (ddDicer) (E) Modulating the activity of the RNAi machinery. Two biological replicates were subjected to seven different conditions, designed to titer Dicer expression either down, by using anti-Dicer siRNA, or up, by using Shield-1. Upon FACS sorting, Venuslow and Venusdark cells were collected and their oligo constructs were sequenced (F) The resulting data matrix of the screen. Each row vector represents a specific combination of a treatment condition (the far left column) and a FACS gate (denoted as D, for Dark, and L, for Low). These row vectors describe the enrichment of each tested RNAi trigger (blue) compared to negative (green highlighted) and positive (red highlighted) controls. The AUC column was calculated best on the ability to separate the positive from the negative controls (G) Selecting the two best conditions. The two row vectors with the highest AUC were selected. Precision-recall (left) and receiver operating characteristics (right) curves for the intrinsic controls are shown. The screen score of each RNAi trigger is the average of these two row vectors.

A total of 16,471 shRNAs candidates were found to target the SARS-CoV-2 genome and the single guide RNA1 (sgRNA1) negative strand. After adding 1,118 positive and negative control shRNAs, the team synthesized 17,589 shRNAs and 50 nt target regions through a deoxyribonucleic acid (DNA) oligo pool.

The oligonucleotides were 185 nt-long each and had two PCR annealing sites, an shRNA, a guide and its corresponding passenger strand, a spacer, and a 50 nt region. Retro-vectors were transduced in 1.2 million Dicer 293FT cells to encode the RNA library at 0.8 multiplicity of infection (MOI) and sorted four million Venushigh 293FT cells three days after infection.

Out of the nine siRNA candidates tested, six significantly lowered the viral RNA load. Among these, the 600x median tissue culture infectious dose (TCID50) titer showed the most dynamic range.

Five of the tested siRNAs reduced the genomic viral load by more than 95%. Notably, both SARS-CoV-2 spike (S) and open reading frame 7A (ORF7A) genes had weak responses with approximately 10% viral inhibition. These two genes were also observed to target the negative strand of viral RNA, thus playing an important part in the viral replication process.

Three other siRNAs had a strong inhibitory effect against SARS-CoV-2 when compared to that of the control siRNA. Overall, only one candidate, Hel14, repressed the viral load by over 95%.

A cocktail of siRNA candidates was found to confer significant repression of SARS-CoV-2. ORF7A showed robust efficacy against the SARS-CoV-2 Delta variant.

Overall, the study findings demonstrate that the siRNA cocktail proved effective in inhibiting SARS-CoV-2 Beta, Delta, and wild-type strains. Thus, the development of the prophylactic approach using siRNAs could be effective against emerging infections.

Bhavana Kunkalikar is a medical writer based in Goa, India. Her academic background is in Pharmaceutical sciences and she holds a Bachelor's degree in Pharmacy. Her educational background allowed her to foster an interest in anatomical and physiological sciences. Her college project work based on ‘The manifestations and causes of sickle cell anemia’ formed the stepping stone to a life-long fascination with human pathophysiology.