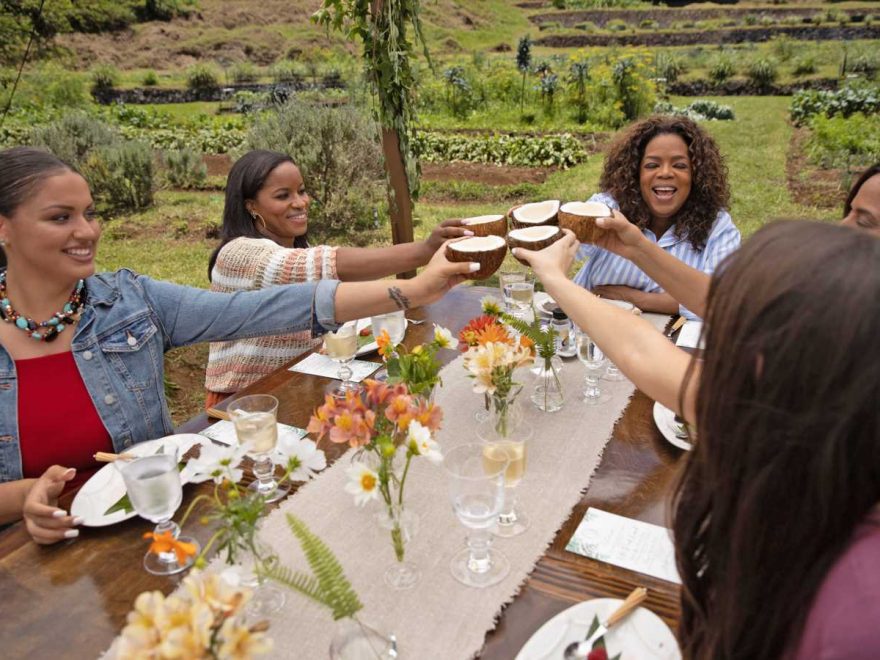 A hearty coconut water cheers to losing weight — and celebrating it with Oprah!

Ten WW members got to share the toast of a lifetime on Friday after being flown to Maui to spend the day — and share a meal — at Winfrey’s private home on the Hawaiian island.

Selected as part of a contest, the WW members were all at different stages in their weight loss journeys. One woman has lost 145 lbs., while another lost 9 lbs., but regardless of how far they have come, they’re all feeling healthier.

Winfrey, who has lost 42 lbs. herself since she became a shareholder in the company back in 2015, said that she loved meeting people who are as enthusiastic and “happy” about the program as she has been.

RELATED: Get Inspired by These Incredible Weight Loss Transformations

“The highlight for me is being able to have people express their sense of celebration and pride in their accomplishment,” the media mogul, 65, tells PEOPLE exclusively. “It’s not a diet, it’s a lifestyle and to see how that lifestyle and taking steps to change the way you eat and how accountability for that eating changes everything about your life … WW is actually happening and manifesting in people’s lives in a way that makes a difference.”

Winfrey said that the contest winners — who were invited to Maui with a guest — were improving more than just their figures by following the program.

“You know, for me, it’s all about freedom,” she says. “It’s not about whatever weight you are, whatever size you’re in, it’s about, do you feel at this particularly point in your life that you are operating at your best, your finest.”

And Winfrey adds that the ten winners are proof positive that getting healthy improves life.

“It’s been exciting to see and inspirational to see people who have lost 145 pounds, 119 pounds, 71 pounds, even nine pounds and feeling so much better because for too many people who have suffered under the burden of feeling not their best, not their healthiest, because of being overweight, you just feel like you can’t do it,” she says. “So having people who prove that you can is really exciting to see.”

Over the course of the day, the WW members dined together before meeting Winfrey’s horses, swimming in her pool, hiking and chatting with her in the house.

It was the first time she’s ever opened up her home to people she hasn’t met before, and Winfrey says that it was a major moment.

“This is one of the places that brings the most joy to me,” she says. “I actually have great reverence for this space and … I don’t share this with a lot of people. Some of my close, close, closest friends have been seated at this table. But l thought particularly for WW members who have been on this journey of self-improvement, self-evolvement, self-betterment for themselves that it would be a great reward to experience this because what’s really exquisite about this property is not the house, but it’s the sacredness of the land.”

“You are surrounded by sky, trees, ocean, forest in the backyard, all of nature, God expressing itself as nature and there’s sort of a peace that comes,” she continues. “So I felt like for me, that’s my greatest reward, and so to be able to share that with other people was a reward for a job well done.”