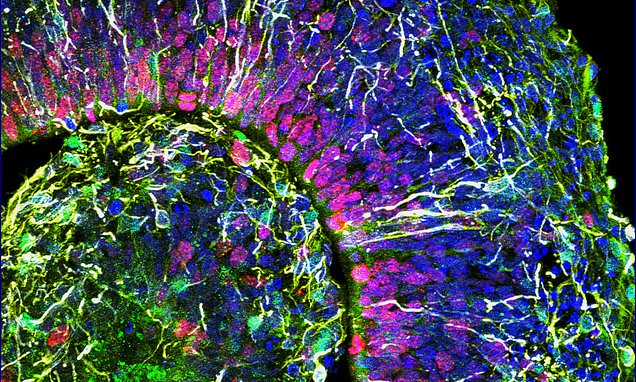 Scientists have grown ‘brains’ in the lab that have similar activity to the brains of premature babies, a new study reveals.

It’s not quite thinking, but the researchers say that regions of the tiny lab brains were communicating with one another, a trait that makes them a great way to study how the human brain develops in action.

Many psychiatric and neurological conditions begin before birth or in infancy, but their roots are difficult to study in human babies.

The University of California, San Diego, research team is optimistic about the opportunities their brain organoids present for understanding these conditions, but know they could also toe a fine line between scientific study and consciousness. 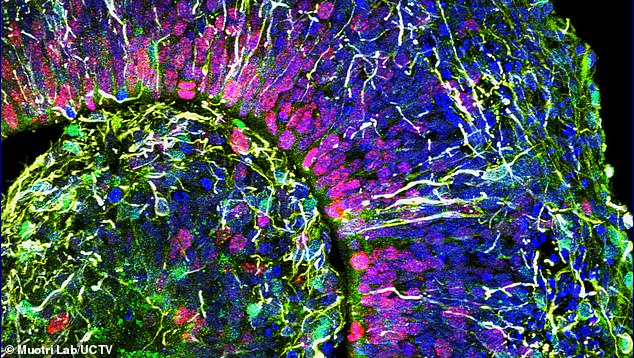 Tiny brain-like organoids have similar electrical activity in brain scans (pictured) what would be expected in the brain of a premature infant, a new UC San Diego  study reveals

UC San Diego’s is not the first lab to grow brain-like organs in petri dishes.

But unlike previous lab brains, theirs have much more complicated structures.

Using stem cells, the researchers tweaked petri dish conditions to encourage the cells turn into brain tissue instead of any other organ.

It’s the basic premise for growing any organ in the lab, the UC San Diego team had concocted a new solution for the brains to grow in – one they hoped would be nearly identical to the conditions under which the human brain develops.

For 10 months, they watched hundreds of petri dishes blossom into tiny brains.

The team used electrodes to monitor the organoids for any signs of activity, because human brain only works if its various regions are talking to one another.

That meant that the lab brains had reached about the same stage of development as a premature baby.

‘The level of neural activity we are seeing is unprecedented in [the lab],’ said UC Davis biologist and lead study author Dr Allyson Muotri.

For scientists, this might mean they can watch a human brain ‘grow up’ in real time.

But she and her colleagues are acutely aware of the slippery slope toward creating life that they must avoid – and say that the lab ‘brains’ are still a long way off from being sentient.

‘The organoid is still a very rudimentary model–we don’t have other brain parts and structures. So these brain waves might not have anything to do with activities in real brains,’ Dr Muotri said.

Eugenics and concern over scientists playing god have been back in the spotlight in recent years with the evolution of CRISPR gene-editing technology.

Last year, Chinese scientists announced that twin girls whose genes they’d edited to protect them from inheriting HIV had been born.

Shortly after their announcement research on the same gene they’d changed suggested it could alter their brain development, too, adding fuel to concerns that science may be over-stepping.

‘As a scientist, I want to get closer and closer to the human brain,’ Dr Muotri says.

‘I want to do that because I see the good in it. I can help people with neurological conditions by giving them better treatments and better quality of life.’

She and her team want to take every precaution to make sure they don’t cross the line between improving human life and creating it in the lab.

‘It’s up to us to decide where the limit is,’ she said.

‘This is the same kind of discussion around CRISPR in babies, and that’s why we have ethics committees to represent all parts of the society.’