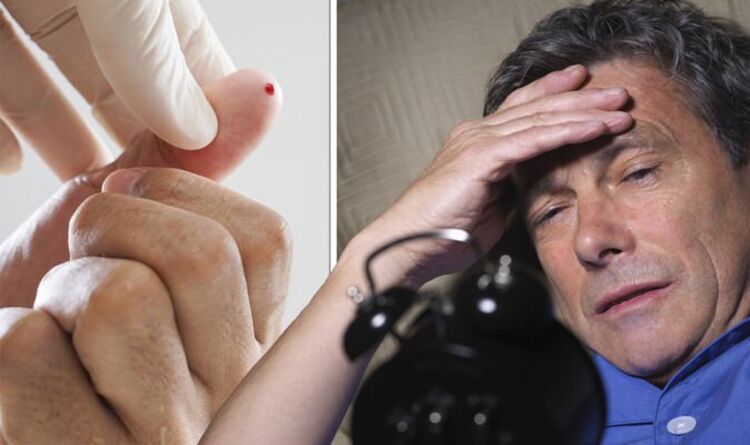 Millions of people around the world have type 2 diabetes, and the majority of these cases stem from obesity and inactivity. Because it is inextricably linked with a host of other conditions, experts continue to underline the pressing need to reduce the risk of the disease. The effects of sleep on the condition are becoming increasingly apparent, but researchers have yet to establish the nature of this relationship. According to new findings, a lack of shut-eye may in fact have a causal effect on the condition.

Diabetes occurs when the body becomes desensitised to insulin – a process known as insulin resistance – which prevents blood sugar from being taken up by cells.

Past studies have suggested that chronic sleep deprivation may set the stage for insulin resistance, but doubts remain over the mechanisms at play.

The findings of a new study suggest a lack of sleep could be associated with higher levels of haemoglobin, implying that insomnia may cause diabetes.

Studies to date have shown that a correlation exists between sleep disturbances and diabetes, but a causal relationship has never been confirmed.

Steve Payne, Sleep Hygiene Expert at Sleep and Snooze, told Express.co.uk: “It’s been known for a few years now that there is a link between insomnia and the risk of developing diabetes, especially in young adults.

“Scientists have found that those under 40 are at particular risk of developing diabetes if they suffer from insomnia.”

The new research, led by the University of Bristol, analysed data from the UK Biobank and the meta-analyses of glucose and insulin-related traits consortium to determine the effects of sleep on haemoglobin levels.

Researchers focussed their study on the assessment of five sleep traits, including insomnia symptoms, sleep duration, daytime sleepiness, and napping.

The findings showed that participants who reported often having difficulty getting to sleep or staying asleep had higher levels of haemoglobin than those who rarely experienced such difficulties.

Payne noted: “Exactly what causes this link is at present, not known. Experts have speculated that sleep deprivation can be linked to the metabolism of glucose and may also cause hormonal imbalances that affect appetite and hunger levels.”

Other hypotheses may also help elucidate potential mechanisms underlying the link between insomnia and diabetes.

Researchers believe several hormones could be impacted by sleep disturbance including cortisol, night-time growth hormone and ghrelin – a hormone produced in the gastrointestinal tract.

Levels of leptin, the hormone that signals the body to stop eating, also drop when the body is sleep-deprived.

It has previously been shown that low levels of leptin combined with higher levels of ghrelin could drive weight gain by leading to unhealthy behaviour towards food.

This is significant because carrying excess weight is the single most important cause of type 2 diabetes, increasing the risk of the condition seven-fold.

Payne added: “There is also the simple fact that when we’re tired out eating habits become irregular and less healthy.

By altering these hormones, scientists believe a lack of sleep may also influence the ways in which the brain utilises glucose.

Preventing the condition could also avert the risk of 57 other health conditions, including cancer, kidney disease and neurological illness.