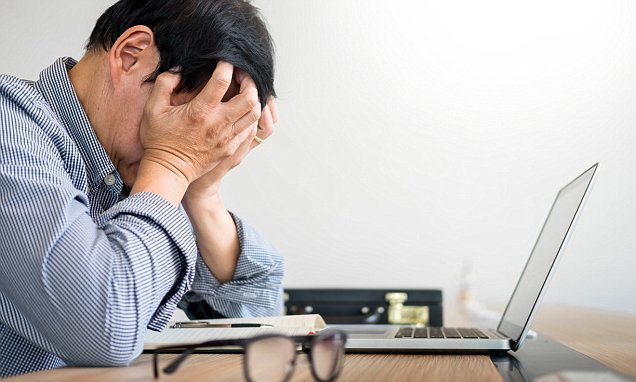 People in high-stress jobs have a greater chance of suffering from depression or anxiety by the time they reach middle age, a study has found.

A 60-year analysis of nearly 7,000 British adults found those with highly demanding careers, low job control and a high level of strain at work are at higher risk of mental illness.

The data looked at whether people’s job strain at age 45 affected their risk of developing a common mental disorder – such as depression or anxiety – by age 50.

People whose job was classed as ‘high strain’ faced more than double the risk of developing mental illness in their middle age.

The researchers suggest that it is important for employers to try to improve working environments to reduce rates of mental illness. 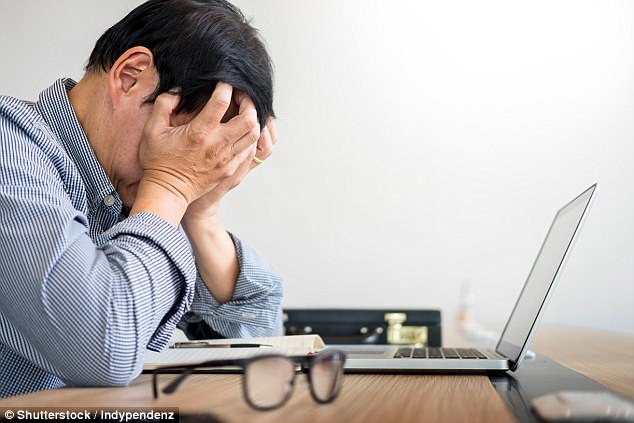 To judge how strenuous someone’s the researchers asked people about their ability to make decisions at work, the opportunity to use their skills, and about the pace, intensity and conflicting demands they experience at work.

Professor Harvey said: ‘The results indicate that if we were able to eliminate job strain situations in the workplace, up to 14 per cent of cases of common mental illness could be avoided.

‘Workplaces can adopt a range of measures to reduce job strain, and finding ways to increase workers’ perceived control of their work is often a good practical first step.

‘This can be achieved through initiatives that involve workers in as many decisions as possible.’

The Black Dog Institute examined records of 6,870 people from the UK National Child Development Study, all of whom were born in the same week in 1958.

HOW TO MANAGE STRESS

Breathe: The hormone noradrenaline is released during stressful situations.  It makes people sweat, breathe heavily and increases our heart rate, according to experts at Harvard Medical School.

Stand up: Standing up straight allows lungs to fill up with air, improving the body’s oxygen supply and significantly reducing the production of the stress hormone cortisol, Dr. Sheela Raja, clinical psychologist and assistant professor at The University of Illinois at Chicago, told Naperville Magazine.

Avoid coffee: This caffeinated drink can cause insomnia, nervousness and a faster heart rate – which can worsen the feelings of stress, Dr Mark Hyman wrote.

Get active: Exercise releases ‘feel good’ hormones called endorphins which can help counterbalance anxiety during stressful situations, according to the Anxiety and Depression Association of America.

People completed questionnaires about their level of job strain at age 45 then, at age 50, a questionnaire commonly used to indicate signs of common mental illness.

Results were then adjusted to rule out the effects of factors such as people’s personalities, their IQ, level of education, previous mental health problems.

Double the risk if your job is ‘high strain’

People whose job is classed as ‘high strain’ have more than double the risk – a 122 per cent increase – of developing mental illness in their middle age.

The final results show people with higher job demands, lower job control and higher job strain are more likely to develop mental illness by age 50, regardless of their gender or type of job.

Mental illness the leading cause of time off work

Professor Harvey added: ‘Mental illness is the leading cause of sickness absence and long-term work incapacity in Australia, equating to $11 billion lost to Australian businesses each year.

‘Our modelling used detailed data collected over 50 years to examine the various ways in which particular work conditions may impact an employee’s mental health.

‘These findings serve as a wake-up call for the role workplace initiatives should play in our efforts to curb the rising costs of mental disorders.’

Previous research has also shown that high levels of stress at work can increase the risk of heart attacks, and make people more likely to eat unhealthily and sleep and exercise less.

Stress can make people physically ill because it can stimulate white blood cells to react in the same way that illness does and cause the body to react as though it is fighting an infection when it is not.