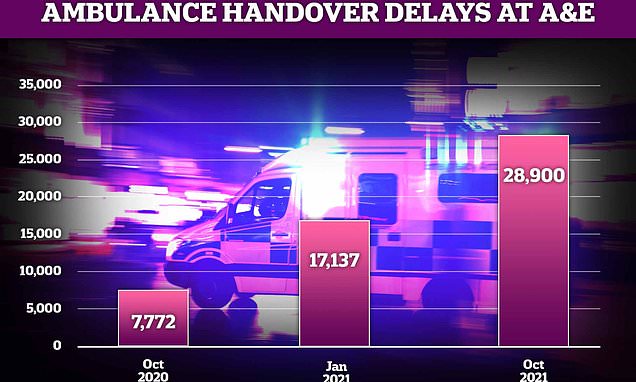 Number of patients waiting in the back of ambulances outside crowded A&E units for an hour has QUADRUPLED in a year, leaked NHS data shows

The number of patients left waiting in the back of ambulances outside A&E for an hour has quadrupled within a year, according to official data.

Britain has been in the midst of an ambulance crisis for months, with patients left stuck outside crowded casualty units for up to 12 hours.

Leaked NHS statistics reveal around 28,900 ambulance handovers that lasted over an hour were recorded in October in England this year.

NHS guidelines state patient handovers from ambulance to A&E staff should last no longer than 15 minutes.

But there is a growing crisis in the ambulance sector, which experts say is fuelled by unprecedented demand and staff shortages.

It has led to concerns that patients are coming to harm, with queues linked to two deaths last week.

NHS bosses have already written to trusts ordering them to ‘eliminate’ ambulance queues outside their sites.

But A&E medics slammed plans for ‘airport-style’ arrival lounges in unused parts of hospitals. The plans were labelled ‘insane’ and criticised for moving the problem, rather than dealing with it.

A&Es are already back to being as busy as they were before the pandemic struck, following month of patients avoiding NHS sites. 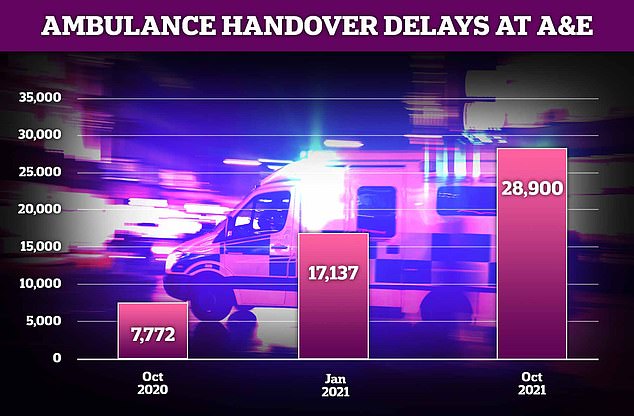 Around 28,900 ambulance handovers at hospitals lasted more than an hour in October in England this year — almost four times the 7,772 recorded in the same month last year. It was also more than 10,000 more than the number seen at the height of the pandemic this January (17,137)

The leaked data seen by the Health Service Journal shows the weekly total of hour-long delays rose from around 2,000 at the end of October 2019 to around 8,000 last week.

The biggest increase in delays was in University Hospitals Birmingham NHS Foundation Trust, which saw 2,098 hour-long waits — up 1,339 (176 per cent) on last years number.

It said it has seen the highest Covid admissions in the country, with A&E attendances regularly above 1,250 per day, compared to around 900 before the pandemic.

NHS England said: ‘The NHS has already set out a 10-point action plan to prepare for significant demand this winter, and has now gone further by writing to trusts and systems asking for further, system-wide action to be taken to prevent ambulance handover delays with immediate effect.

‘Staff have gone above and beyond over the last year, contending with record levels of A&E attendances and ambulance callouts, all while treating more than 470,000 seriously ill Covid patients — anyone who needs the NHS should come forward through the appropriate route so staff can help you with the best option for your care.’

Earlier this week, ambulance leaders described the ‘highest level of emergency activity in history’ and reports from around the country paint a bleak picture of ambulances queuing for hours outside busy hospitals.

Martin Flaherty, managing director of the Association of Ambulance Chief Executives, said: ‘The ambulance sector is experiencing some of the highest levels of emergency activity in its history and this is regrettably leading to delays in the sector’s ability to respond to some patients.’

And the College of Paramedics warned the UK faces a ‘bleak’ few months as the NHS prepares to fight its standard winter pressures on top of Covid.

Richard Webber, a paramedic and spokesman for the college, said: ‘This issue has been bad for a while, hospitals have been so much busier.

‘Patients are being admitted and what’s happening is they cannot move them straight into A&E, so ambulances have become cabs waiting to unload outside hospitals.

‘Our members are reporting delays of four to six hours in getting to people, which means there can be up to 15 ambulances waiting outside hospitals with patients inside.

‘This also creates a backlog of 999 calls. I’m talking (about) up to 300 calls for a service to deal with, leaving people to wait at home potentially in need of serious medical attention.

‘Everything is therefore taking longer; staff are dealing with three or four incidents every shift, when they would usually do as many as eight.’

Mr Webber said paramedics were often working three hours more than their shift and were having to travel further, leaving many ‘tired and burnt out’.

He said the West Midlands had been the worst-affected region, with waits for ambulances of over eight hours ‘not uncommon’.