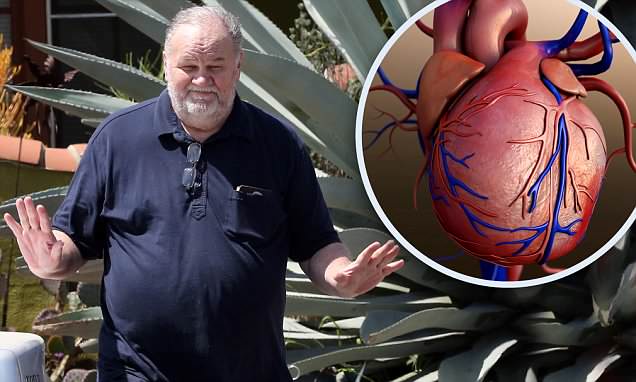 Hours after declaring that he won’t walk his daughter down the aisle on Saturday, Thomas Markle has said he underwent heart surgery on Wednesday morning.

He said doctors planned to ‘go in and clear blockage, repair damage, and put a stent where it is needed’ during the operation.

Past president of the American Heart Association, Dr Sidney Smith, MD, told Daily Mail Online how stents work, when they are placed, and why a patient might need three stents at once.

SCROLL DOWN FOR VIDEO OF A STENT PROCEDURE 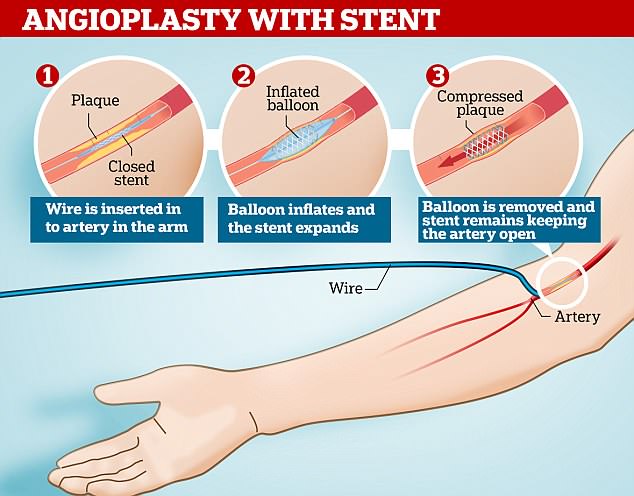 A stent is a wire mesh tube used to prop open an artery during an angioplasty. Once the balloon is removed, the stent remains to keep the artery open 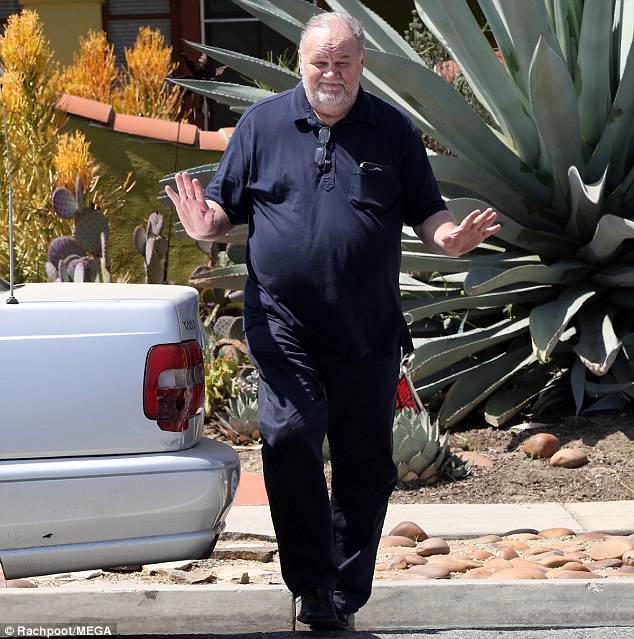 HOW IS THE PROCEDURE PERFORMED?

A stent is a wire mesh tube that props open arteries.

To open the narrowed artery, the surgeon may perform what’s known as an angioplasty.

It involves making a small incision in a patient’s arm or leg, through which a wire with an attached deflated balloon is thread through up to the coronary arteries.

In some cases, this is all that’s needed, to go in and break up the blockage, without putting any permanent artery-openers in place.

However, in some cases surgeons will put in a stent to keep the arteries held open.

The stent surrounds the deflated balloon and expands with it when the balloon is inflated.

After the balloon has been deflated and removed, the stent stays in the artery permanently.

HOW COMMON IS IT?

Angioplasties are increasingly common in the United States and Mexico due to rising rates of heart issues.

And stents are becoming increasingly common in angioplasty patients, since it is very common for the arteries to narrow again if nothing is put in place (this is known as restenosis, and happens in about a third of cases).

CAN IT BE PERFORMED DAYS OR WEEKS AFTER A HEART ATTACK?

Yes – depending on what kind of heart attack was suffered.

There are two kinds of blockages – a STEMI (which is a complete blockage) or an NSTEMI (a partial blockage).

STEMI stands for ‘ST-elevation myocardial infarction’, which means the patient has suffered cardiac enzyme changes, and changes to their electrical heart activity, as seen on an EKG scan.

‘A STEMI is a very big, severe heart attack where a patient comes into the emergency room and the artery is totally blocked, and needs to be opened up straight away and the stent is placed,’ Dr Smith, Professor of Medicine, Cardiology, University of North Carolina School of Medicine, explained.

‘That’s the patient that goes direct into surgery.’

‘In other cases, the patient may have a non-STEMI. They may have chest pain, and they come into the hospital with enzyme changes but no changes on their EKG [electrical activity of the heart]. The need is not urgent. Stents are placed but it can be days later.’

WHY WOULD A PATIENT GET THREE STENTS AT ONCE? 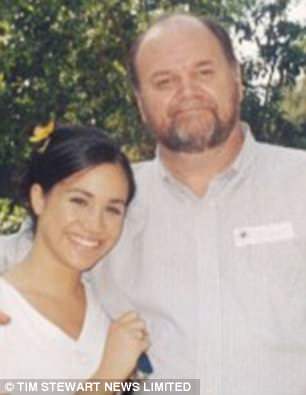 Meghan Markle, pictured with her father, may be walked down the aisle by her mother on Saturday as Mr Markle said he will be recovering from heart surgery

It depends how many blockages they had, or how many vessels were affected.

‘The decision to place stents in the coronary arteries is based on the number of significant blockages that’s there,’ Dr Smith explained.

‘Three is not out of the ordinary. Sometimes you place just one, sometimes two or three – it completely depends.

‘You places stents where there is a significant blockage.

‘It could be that there were two or three vessels involved, or three blockages in one vessel.

‘That would warrant three stents.’

He adds that the amount of blockages has nothing to do with the severity of the heart attack, or whether it would be a STEMI or NSTEMI.

HOW IS THE RECOVERY?

For patients being treated for chest pain, most are usually able to go home the same day of the operation. Patients are often advised to avoid strenuous activities and driving for at least a week.

But Dr Smith said it depends on each patient, and particularly on whether they have other underlying health issues.

‘It depends on how well their heart is pumping,’ Dr Smith said.

‘Patients are often able to go home within 24 hours, usually into cardiac rehabilitation.’

As for the patient taking a trans-Atlantic flight, Dr Smith said that would have to be decided on a case-by-case basis.

‘It depends on how they’re doing, and how long the flight is,’ he said.