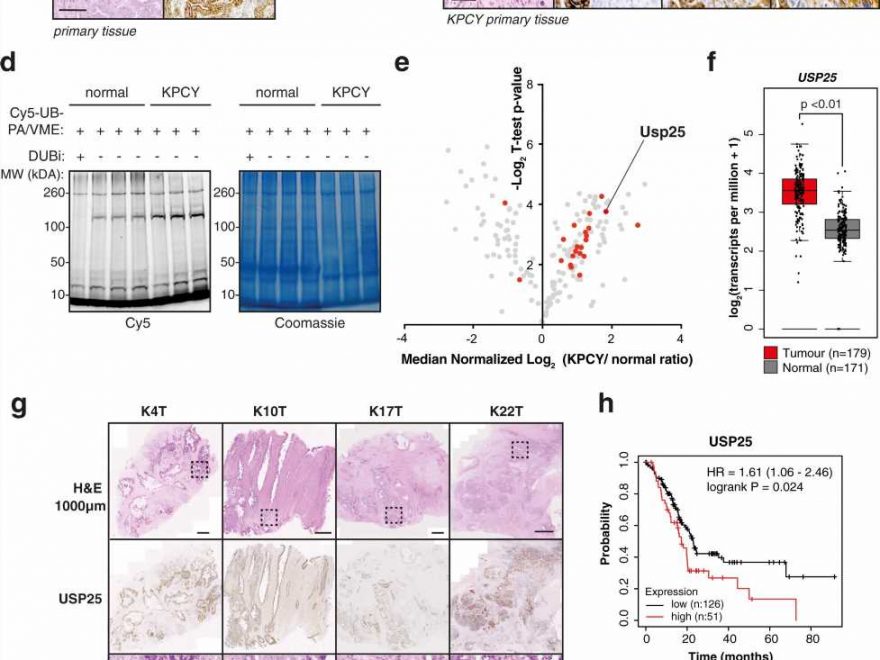 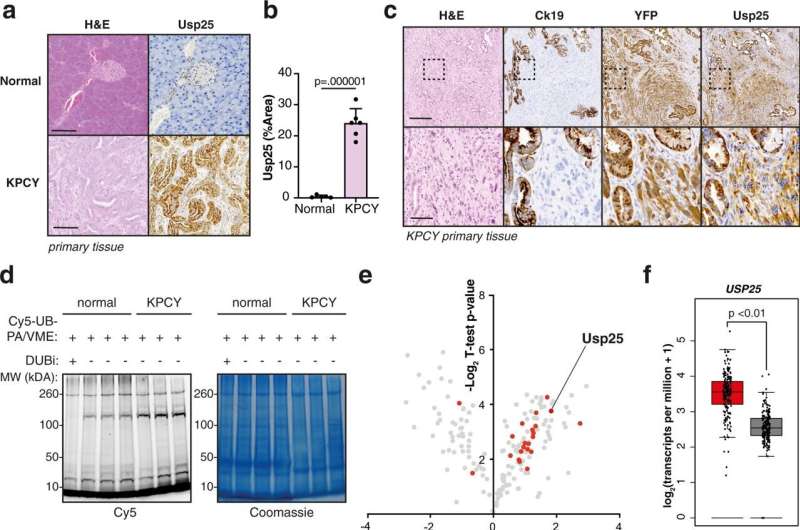 Pancreatic cancers recycle resources to fuel their survival and growth, opening up the possibility of new treatments aimed at stopping them from doing so, scientists report.

New findings show that pancreatic cancers make use of a key “recycler” protein to keep pace with their constant demand for oxygen and energy, as they grow and spread. Blocking the recycler could suffocate pancreatic cancer cells by starving them of oxygen and energy—and the researchers now plan to create new drugs aimed at suffocating tumors. The new study is the first to investigate the role in pancreatic cancer of “deubiquitylating enzymes” (DUBs)—which stop other proteins from being “binned” by the body so they can be recycled instead.

The team, led by scientists at the Institute of Cancer Research, London, used protein analysis techniques in mice and in “mini-tumors” grown in dishes from patient tissue to explore the role of DUBs in pancreatic ductal adenocarcinoma (PDAC). They identified a DUB called USP25 as a key “recycler” protein which supported the survival and growth of cancer cells. The research is published in Nature Communications.

Pancreatic tumors are known to have low oxygen “micro-environments.” This is because the rapid growth of pancreatic cancer often outstrips the oxygen supply, which cancer cells need to survive and grow. Researchers found that USP25 can regulate a protein known as HIF-1a to help pancreatic cancer cells adapt to low oxygen levels in the tumor. USP25 does this by preventing HIF-1a from being “binned,” so it can form new blood vessels to supply the cancer with oxygenated blood.

Scientists showed that genetically deleting USP25, or blocking it using drugs, meant mini-tumors were unable to grow, as they were starved of oxygen. They believe that by acting as a “recycler” protein, USP25 can reverse the protein modifications on HIF-1a that destine it to be degraded by the body, stabilizing HIF-1a and allowing it to continue supplying oxygen and nutrients to cancer cells. In this way, USP25 plays a role in helping pancreatic cancer grow and spread.

Researchers believe the mechanism may also be important for other low-oxygen tumor types, such as breast cancer, and plan to explore it further. They will seek to design USP25 inhibitors and ultimately to assess the new approach to treatment in patients with pancreatic cancer. They are also planning to investigate the role of other druggable DUBs in pancreatic cancer.

The Institute of Cancer Research (ICR) launched its new Center for Protein Degradation last month, where scientists will aim to exploit the normal waste disposal system in cells to create new forms of cancer treatment. The ultimate aim of the center is to lead to new treatments for patients with currently un-druggable, hard-to-treat cancers.

A new approach for a hard-to-treat cancer

Professor Axel Behrens, Scientific Director of the Cancer Research UK Convergence Science Center at The Institute of Cancer Research, London, and Imperial College London, said, “Our findings show that pancreatic cancers recycle proteins within cells to keep pace with their demand for oxygen and energy. By stopping other proteins from being degraded by the body, the recycler protein USP25 can help provide oxygen and nutrients to cancer cells, fueling their growth.

“If we can create drugs to stop USP25 from carrying out its recycling function, we may be able to suffocate cancer cells by starving them of oxygen and energy. We hope to eventually be able to test this new approach in people with pancreatic cancer—a particularly hard-to-treat and deadly form of the disease.”