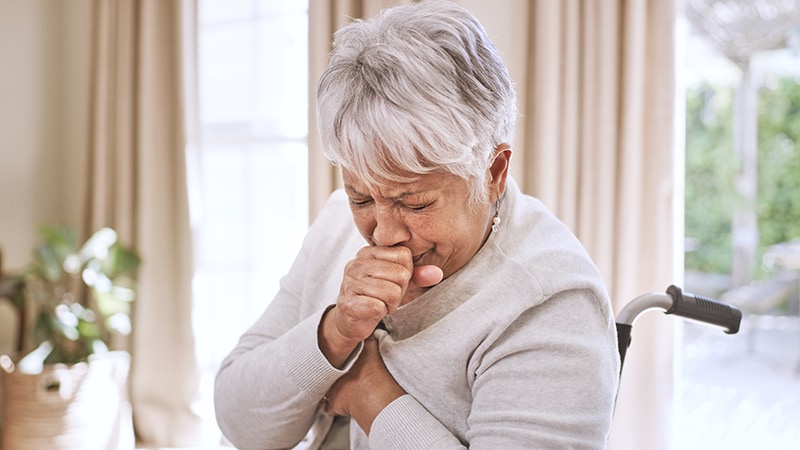 “Unfortunately, chronic cough in ILD is a pervasive and very distressing problem for our patients,” Janet Lee, MD, University of Utah, Salt Lake City, Utah, told Medscape Medical News in an email. “Next to dyspnea,” she added, “chronic cough is probably the most common symptom of ILD, and this cough can affect a patient on several levels.”

Coughing fits can worsen breathing and make it even harder for patients to exert themselves. This could contribute to further deconditioning, Lee explained. She also noted, “As we have all learned during the COVD-19 pandemic, people who don’t understand that [a] patient can cough because of underlying lung disease may well construe [that] ILD patients have something else, which makes patients socially anxious.”

Although more data are needed, “others have postulated that the mechanical forces inflicted on the lungs by a serve cough could damage them in the long-term,” Lee emphasized.

The study was published online in the journal Chest.

A total of 1447 patients with ILD were included in the study. The mean age was 68 years; 63% of the cohort were men, and 91% were White patients. A range of ILD diagnoses was represented, the authors note. Some 61% of patients had idiopathic pulmonary fibrosis (IPF); 17% had collagen vascular disease (CVD-ILD); 10% had non-IPF; 8% had hypersensitivity pneumonitis (HP); and 3% had other ILD. “Our primary measure of interest was the LCQ [Leicester cough questionnaire], a PRO [patient-reported outcome] survey designed to measure the impact of cough on health-related QOL,” the investigators explain.

The investigators first looked for patient factors that might be associated with baseline LCQ scores. Patient-related factors associated with worse cough-specific QOL included younger age; a diagnosis of “other ILD”; gastroesophgeal reflux disease (GERD); and lower percent predicted forced vital capacity (FVC). For every decade a patient was younger in age, the estimated odds of a patient having a lower LCQ score were 1.2 times higher (P < .003).

“After adjusting for several variables including baseline disease severity, [we showed that] a one-point decrease in LCQ score [indicating lower cough-specific QOL] was associated with a 6.5% higher risk of respiratory related hospitalization…a 7.4% higher risk of death…and an 8.7% higher risk of lung transplant,” Lee and colleagues report.

“To our knowledge, this is the first study demonstrating that independent of disease severity, poorer cough-specific QOL, as measured by the LCO, is associated with increased risk of respiratory hospitalization, death, and lung transplant at 12 months…. [T]here was no observed association between baseline LCQ scores and pulmonary function decline,” the investigators write.

“Our study adds to the current evidence showing that PRO tools can independently predict mortality among patients with IPF…. Our study supports integration of routine quantitative assessment of cough alongside other measures of disease status since patients with worse cough-specific QOL may experience a deterioration in their clinical status, in the absence of obvious decline in their PFTs [pulmonary function tests],” they suggest.

Asked to comment on the findings, Kerri Johannson, MD, clinical associate professor of medicine, University of Calgary, Alberta, Canada, said she was both “surprised” and “not surprised” by these findings. “Cough is a common symptom in patients with pulmonary fibrosis that negatively impacts their day to day lives,” she told Medscape Medical News in an email.

Johannson noted that some patients with pulmonary fibrosis will cough all day long and even throughout the night, and it can be worse with activity, talking, laughing, or eating, “so they hesitate to do any of these things to stave off coughing fits,” she elaborated.

Indeed, some patients cough so hard they experience pulled muscles or broken ribs, she added. She reemphasized that “it is a very big problem and one that is hard to treat.” There are few effective therapies for cough associated with this disease.

“Cough remains an important symptom that should be enquired about at ILD visits, as it may signify disease progression, worsening QOL, or a new process, such as infection or malignancy,” Johannson said.