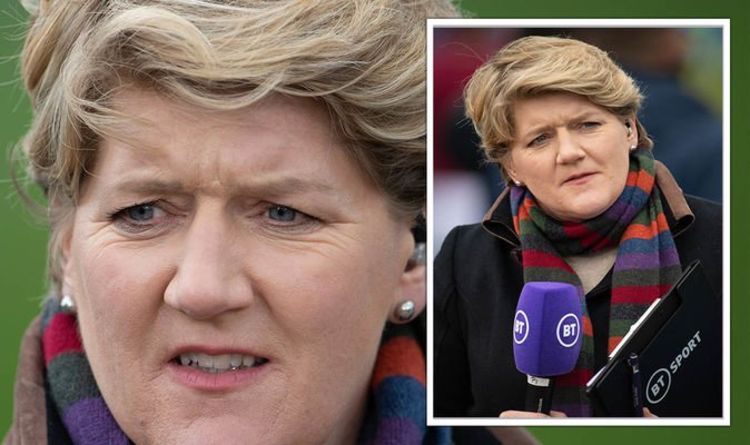 The presenter made her TV debut introducing highlights of Royal Ascot, in 1995, and since has made her way to becoming one of the best sport reporters on the BBC and Channel 4. But it was in 2009 when the star faced her biggest challenge yet. After finding a cancerous cyst on her thyroid gland Clare was diagnosed with thyroid cancer. Remaining grounded throughout the entire ordeal she urged those around her to not offer condolences.

Instead, when talking about her diagnosis to the Daily Telegraph the presenter said that it had made her “quire practical”.

She said: “I got diagnosed with something, and I am being treated for it. It does not make me brave, though. It just makes me quite practical”.

Clare continued to explain that her reaction to the dreaded word “cancer” was to put her head down and get on with life.

She explained: “I am not going to deny that to hear the word ‘cancer’ is scary.

“It is. But I just decided not to worry about things. And I haven’t. I have kept going. I have not freaked out, cried a lot or felt ‘woe is me.’

After receiving her diagnosis, Clare went on to have her thyroid gland removed and was set to undergo radioactive iodine treatment in the following months.

Remaining headstrong, the presenter said that her only main concern is the effect it might have on her voice, as her career depends on it.

She said: “So far there have been no real side effects. I’ve been wheezing slightly but other than that I feel fine. My main worry is my voice because that is what I do.”

Thyroid cancer is a rare form of the disease that affects about 1,750 people every year in the UK.

According to the NHS the condition is common in people in their 30s and those over the age of 60. In addition women are twice as likely to develop it than men.

Symptoms of thyroid cancer can include:

In Clare’s experience, she first noticed a lump on her own throat while watching herself on TV. This emphasises the importance of getting lumps checked, even if they are not cancerous.

The NHS explains that thyroid cancer happens when there’s a change to the DNA inside thyroid cells, which causes them to grow uncontrollably and produce a lump.

Although medical professionals are unsure what exactly causes this change, there are a number of factors that can increase your risk.

These include other thyroid conditions – particularly an overactive or underactive thyroid, a family history of thyroid cancer, obesity or having already been exposed to radiation therapy.

Although there are various treatments for the condition, medical professionals will guide you to which one is best depending on the type of thyroid cancer you have and how far it has spread.

The main treatments are:

After treatment, you’ll have follow-up appointments to check whether the cancer has come back. This is exactly what happened to Clare, and in 2011 sahe announced that she was given the all clear.

Explaining on BBC Radio 2’s French and Saunders programme Clare said: “I had to have a little operation just before Christmas to take out a nasty little lymph node and there was a worry that I might have to have more treatment.

“But I had a lovely letter from my oncologist just after Christmas saying, ‘Hurrah, no more treatment’, so I’m very happy about that. 2011 is going to be a good one.”