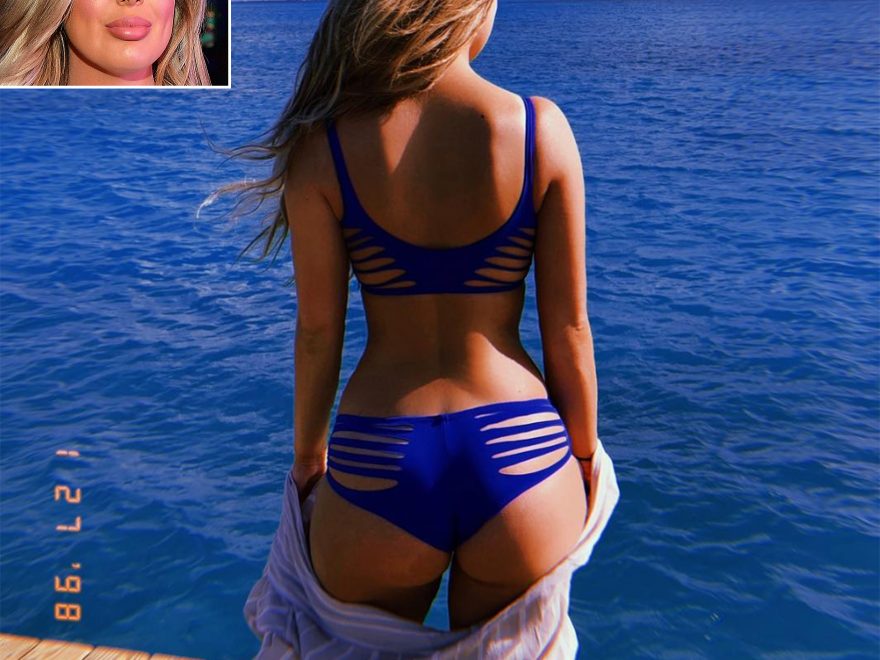 Brielle Biermann is not letting criticism get her down.

On Sunday, Biermann shared a photo to Instagram featuring herself in a blue, cheeky bikini while she looked out at the matching ocean waters. To go along with the scenic shot, Biermann, 21, captioned it: “I crave a love so deep the ocean would be jealous.”

While many fans praised Biermann for her “beautiful” shot and figure, and complimented the reality star on her bikini, there was one account holder who picked up on something else.

“What is wrong with your butt cheek?” the user asked, referencing the barely-noticeable skin discoloration on Biermann’s behind. “Peeling from a sunburn?”

This is not the first time that Biermann has had to defend her body. Over the years, she has been very candid about her decision to get her lips injected, causing her to answer to criticism from many of her followers.

In a series of numerous throwback photos shared on her Instagram Story two weeks ago, Biermann gave fans a look back at her younger self. In one shot in particular, she drew attention to her significantly smaller pout.

“To those who say I look better before lips… you’re a liar and this photo is PROOOOOOF,” Biermann wrote over the old photo.

In March, Biermann posted a group photo from Khloé Kardashian‘s baby shower, featuring herself — with plump lips — alongside Kardashian, Larsa Pippen and her mom Kim Zolciak-Biermann.

Followers began to quickly respond to the photo, with one commenter asking her to “leave her mouth alone.”

Before turning off the comments on her post, Biermann responded, “My lips do not look good in photos. I f—ing get it. I’m really over y’all saying this as if I’ve never seen/heard it. I’m not changing them — whether it looks good to you or not.”

Biermann didn’t stop there. She also hopped on Twitter to reaffirm that she does not care what anyone thinks about her appearance, writing, “Going to get my duck lips plumped up some more !! C ya!”

In 2016, Zolciak-Biermann, 40, who has also been honest about getting work done, defended her daughter’s appearance and slammed the cyberbullies for posting negative comments about Biermann, who was 19 at the time.

“Oh hell no, you f—ers on Bravo TV under Brielle’s pictures writing comments,” she began in a rant on Snapchat. “You’re f—ing with the wrong one, honey — the wrong one!”

“I don’t … sit behind a computer screen and write nasty f—ing comments about a 19-year-old,” she went on. “I would love for all you f—ers to post your daughter on your page so I can tell you exactly what the f— I think about her. Okay?”

“You low life pieces of s—, get off Bravo TV, stop talking s— about my daughter and get a f—ing life and be positive,” she continued. “Do you not see that you are the reason why this world is so f—ed up? Like, you’re grown-a— adults.”

RELATED VIDEO: Kim Zolciak-Biermann on Her Daughter’s Body Shamers: ‘Why Would You Do That to a 14-Year-Old?’

“They say ‘Don’t feed into it,’ but I’m so over the nasty comments and s—,” she added. “If my daughter wasn’t strong, can you imagine what the f— you would do to her with your comments?!”

That same year, Zolciak-Biermann also defended her decision to allow her daughter to get lip filler injections, explaining on an episode of Watch What Happens Live with Andy Cohen, “I’ve heard her complain about her lips since she came out of the womb, honestly.”