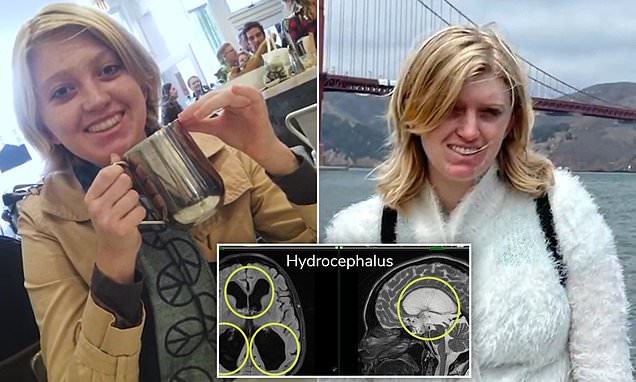 Woman, 23, who struggled with mood swings and walking straight for SIX YEARS is diagnosed with brain condition moments before admission to psychiatric hospital

A ‘bi-polar’ woman who faced mood swings for six years was finally diagnosed with a brain disorder moments before being admitted to a psychiatric ward.

Over the next few years she started struggling to remember simple instructions, switching from being aggressive to ‘like a toddler’ — and being unable to walk in a straight line or without dragging her right foot.

Therapists initially said she had severe depression and then bi-polar disorder, giving the family pills to treat both.

But Chloe kept getting worse, and in September 2020 was checked into an intensive psychotherapy facility for six months — costing all $180,000 of the family savings.

It was only when the teenager was rushed to the emergency room at Cedars-Dinai Marina del Rey hospital that a CT scan revealed she actually had hydrocephalus.

The condition occurs when too much fluid collects around the brain, compressing it and triggering balance and mood problems. It is diagnosed in about two in 1,000 Americans after birth.

After the diagnosis, Chloe was raced to surgery to remove the excess fluid and restore normal drainage. She was discharged five days later.

‘If doctors hadn’t done that scan, Chloe would have gone to that psychiatric facility and she would have continued to be treated as a psychiatric patient,’ her mother Alison, said.

Chloe is now driving again, holding down a job and has joined a design college in San Francisco.

‘For me, having them diagnose me it means the opportunity to have the life I’ve always wanted and that I thought I wouldn’t be able to have,’ she said. 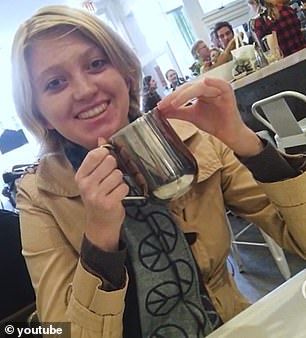 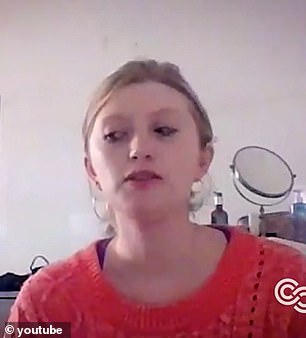 Concerns were first raised about Chloe Kral, now 23, when she vegetated in her room for six weeks instead of going to college. Her parents brought her home to California, but it still took another six years before doctors finally diagnosed her condition. She is pictured above before surgery (left), and afterwards (right) 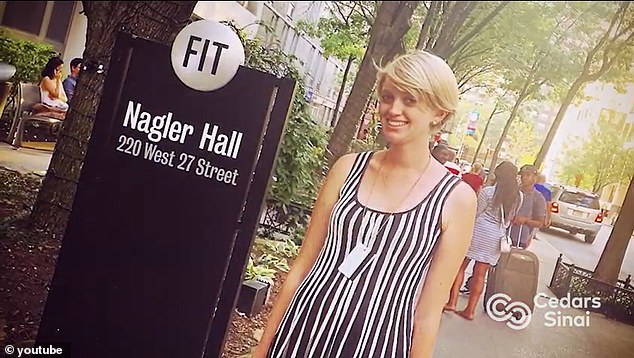 Chloe was initially living like any other teenager, and in 2015 left home to go to the Fashion Institute of Technology in New York. She is pictured above outside the college 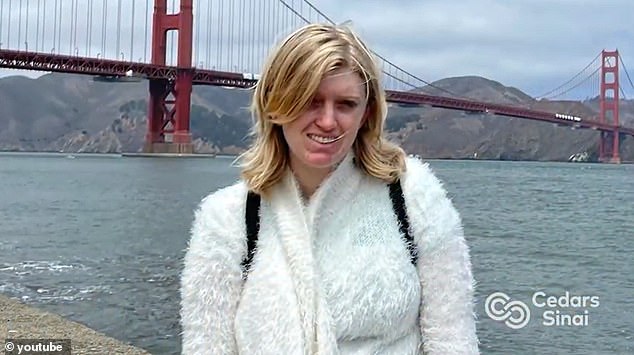 But after she spent six weeks vegetating at home, her parents rushed her home to near Palos Verdes, California, putting her condition down to severe depression. But it got worse 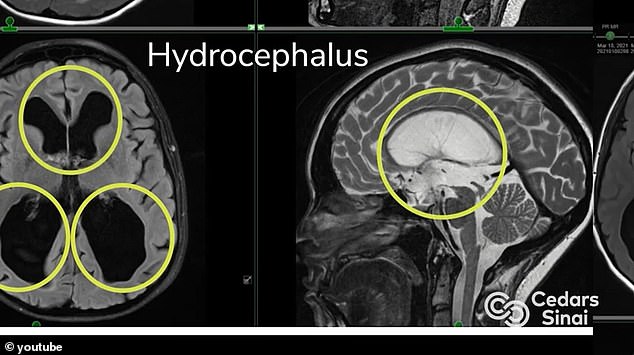 It was only when she was checked in to hospital in California after threatening to kill herself that doctors did a CT scan and found she actually had hydrocephalus. This is a condition where too much fluid builds up around the brain, compressing it and triggering problems such as mood swings and difficulty balancing. The above picture shows the ventricles in the brain (right), which are swollen due to too much fluid collecting 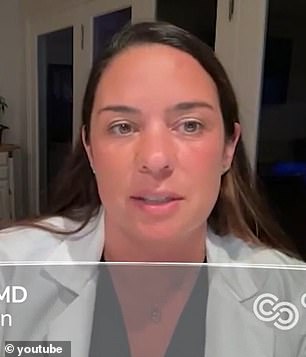 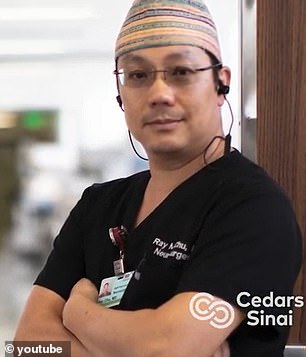 Dr Elizabeth Mitchell (left), at Cedars-Dinai Marina del Rey hospital in California, said she decided on the CT scan when it appeared something was a ‘bit off’. The surgery was done by Dr Ray Chu (right), who said it helped to re-establish normal fluid flow

Hydrocephalus — also known as ‘water on the brain’ — is a rare condition that can either be present when someone is born, or develop during their lifetime.

It happens when channels for draining cerebrospinal fluid — which surrounds and cushion the brain — become blocked, leading the fluid to build up.

In turn, this can begin compressing areas of the brain, leading to symptoms including mood swings, headaches, nausea and vomiting.

Treatment involves cutting a hole in the skull and using an instrument about the size of a pen to clear the blockage and re-open the channels, ensuring normal drainage. When left untreated, the condition can lead to permanent brain damage.

Hydrocephalus is a build-up of fluid in the brain, which can damage tissue.

Aside from an abnormally-sized head, other symptoms can include headache, nausea, vomiting, confusion and vision problems.

Hydrocephalus’ cause is usually unknown but may be due to issues with cavities in the brain or an underlying health problem that affects blood flow, such as heart disease.

It can also be acquired by damage to the brain due to a head injury, stroke or tumour.

Treatment is shunt surgery, which involves implanting a thin tube into the brain to drain away excess fluid to another part of the body where it can be absorbed into the bloodstream.

If untreated, hydrocephalus can be fatal due to increased pressure compressing the brainstem, which is responsible for regulating heart rates and breathing.

A patient’s prognosis after surgery depends on their age and general health.

In Chloe’s case, the build up of fluid around her brain was pressing her frontal lobes against the back of her forehead. This area is involved in memory, decision-making and controlling emotions.

Doctors said she likely had the condition from birth, and that her brain had been compensating for it for as long as possible. They added her lack of common symptoms likely delayed the diagnosis. She did not suffer any long-term damage.

Cedars Sinai Marina del Rey hospital, in California, revealed the tale as a warning to other families struggling to diagnose their children’s condition.

Describing her daughter before October 2016, Kral said she was a ‘very proficient skier’ who loved to go to the slopes.

‘Then at around 13 or 14, her balance wasn’t as good, and she didn’t want to ski anymore. But it was just so gradual we didn’t think much of it,’ she added.

Like any aspiring student, Chloe pursued her dream to be a designer and enrolled at the New York Fashion Institute of Technology.

But in thanksgiving after her first term she told a therapist she was ‘struggling a lot’, reports the Washington Post, and prescribed antidepressants.

In her second year she suddenly started vegetating in her flat, triggering Kral to rush her back to California blaming the episode on severe depression.

Chloe was then enrolled in a community college, but quickly dropped out because she kept forgetting to hand in assignments. She was also fired from jobs at a movie theater and local market because she could not remember basic instructions.

By mid-2019, she was facing what appeared to be ‘bipolar’ episodes — where her mood would swing rapidly between aggression and clinging to her mother ‘like a toddler’ and following her around the house. She was also not sleeping, would talk rapidly, and at one point disappeared for two days.

Six months later Alison also noticed her daughter was now dragging her right foot during walks around the local area.

By the autumn, Chloe had begun spending days just lying on the living room sofa, was forgetting to bathe and brush her teeth and even wet herself in the car.

This was when Alison took the decision to move Chloe to a psychiatric ward in a last ditch attempt to get her daughter back.

‘It just stripped us, but what choice did we have? I remember thinking that if this doesn’t work, I don’t know what we’re going to do,’ Alison said. 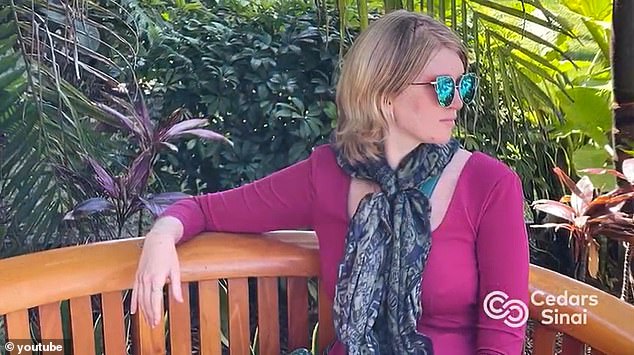 Chloe, pictured above before the condition was diagnosed, was initially attending a fashion college in New York. Doctors said her brain had likely been compensating for the condition for as long as it could 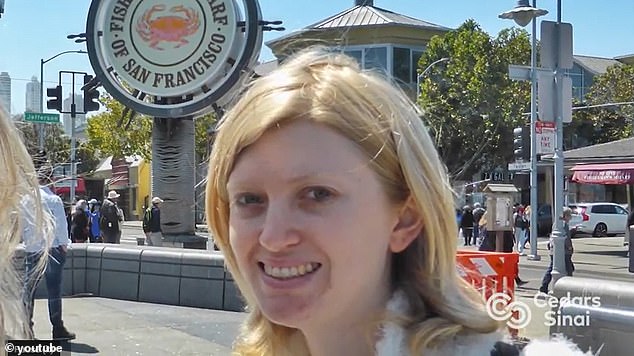 Chloe said that the eventual diagnosis and surgery had given her her life back. She is pictured above before doctors found out she had hydrocephalus 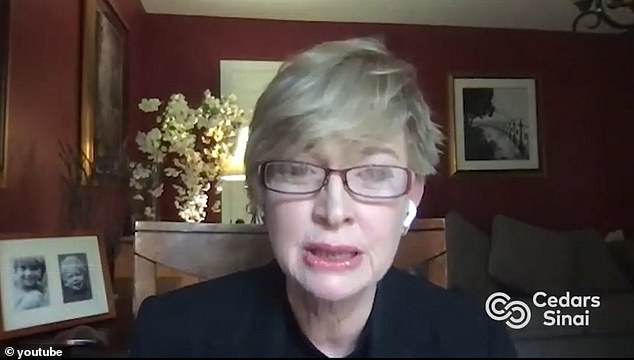 Pictured above is mother Alison Kral, who struggled with Chloe for six years before the condition was eventually diagnosed. She said the doctor that spotted her daughter’s condition should be awarded a medal

In March 2020, however, Chloe started threatening to harm staff in the hospital and then threatened to kill herself.

Police were called and she was put in four-point restraints — which restrain the hands and feet —  before being taken to the Cedars-Sinai emergency ward.

Upon arrival there, physician Dr Elizabeth Mitchell noticed something was ‘a bit off’ with the patient.

Chloe was ‘mumbling about Rosa Parks’ on admission, she told the Washington Post, and managed to tell doctors she had not used and drugs or alcohol but was otherwise ‘incoherent’.

‘My gut thinking was something was a little bit off, so I ordered a CT of her head,’ Mitchell said.

‘And I just, I could not believe it. I called the entire emergency department to come look at this CT it was a very dramatic CT scan.’

The scan had revealed what Kral said was ‘one of the worst cases’ of hydrocephalus that the doctors had ever seen.

Chloe was quickly rushed for surgery to clear the fluid from around her brain, and get it to start draining away again normally.

Dr Ray Chu, the neurosurgeon who carried out the procedure, said it helped to ‘in a sense re-establish normal spinal fluid flow’.

One day after the surgery, Chloe rung her mother and asked her to bring some magazines for her to read because the ward was ‘so boring’.

By three months after the operation she was ‘totally independent’, and once again driving, working and applying for college.

‘All throughout high school I was really focused and good at timing and once I got into college there was like this complete change around,’ Chloe said.

But talking about her condition, she said: ‘I was just kind of wasting the day away. I didn’t have anything that I wanted to do. Nothing motivated me or made me excited. It was just the same thing every day, and I didn’t see anything changing.’

‘That emergency doctor, when I went there that day I said I just want to kiss your feet — like, thank you!’ Alison said.