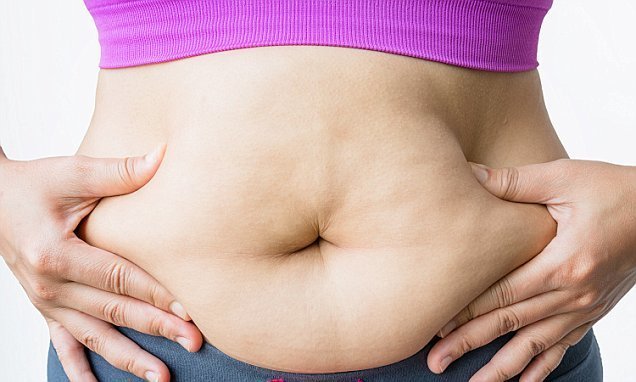 People who have bigger bellies may be more likely to get dementia as they age, according to a new study.

A higher waist to hip ratio, which scientists use to measure obesity, leads to people performing worse on thinking tests and raises their risk of brain decline.

Scientists think this is because high levels of fat release more inflammatory chemicals into the blood which damages brain health.

Researchers from Trinity College Dublin studied data from more than 5,000 people in what is thought to be one of the largest ever studies of its kind.

They say the findings may point to the importance of cutting obesity rates to help tackle dementia, which is expected to affect 42.3 million people around the world by 2020.

And this could be worsened by a global obesity crisis – a quarter of UK adults are obese, as well as 40 per cent of adults in the US and 28 per cent of Australians. 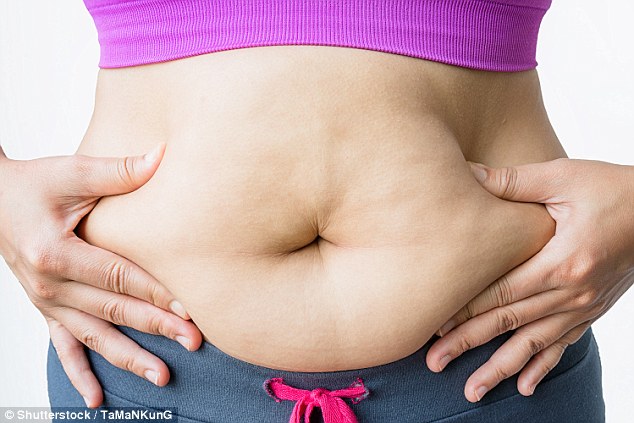 People who have more fat around their middle – a measure scientists use to determine levels of obesity – perform worse in tests of memory and cognitive ability, so are more likely to get dementia in old age, researchers from Trinity College Dublin said

The researchers used data collected from thousands of people aged over 60 in Ireland and Northern Ireland.

The data revealed the link between people’s waist to hip ratio and their scores on tests of cognitive function, which analyse how well somebody’s brain works.

People with a higher waist to hip ratio – those who have fatter stomachs – performed worse in the thinking tests, the study found.

The scientists suggest this is because fat cells trigger inflammation in the brain, stopping it from working as well.

SMALL AMOUNTS OF ALCOHOL COULD STAVE OFF DEMENTIA

Middle-aged people who drink the equivalent of 175ml of wine a day are half as likely to develop dementia as those who abstain from alcohol, a study has found.

Researchers at the Universite Paris-Saclay in France said low amounts of alcohol can have a protective effect on the heart, reducing the risk of cardiovascular diseases such as stroke – though problem drinkers were at a far greater risk.

In the study, published in the British Medical Journal, researchers tracked more than 9,000 UK civil servants over 23 years to examine how alcohol intake during adulthood related to dementia.

Scientists found those who did not drink in middle age had a 47 per cent higher risk of dementia compared with those who consumed between one unit and the recommended limit of 14 units of alcohol per week.

Professor Conal Cunningham, the senior author of the study said: ‘While we have known for some time that obesity is associated with negative health consequences our study adds to emerging evidence suggesting that obesity and where we deposit our excess weight could influence our brain health.

‘This has significant public health implications.’

Dementia affects around 850,000 people in the UK and 5.7 million Americans, and causes their memory, judgement and communication to worsen over time.

Professor Cunningham’s findings add to past research which has shown overweight people do not perform as well in tests of memory and spatial awareness as people who are a normal weight.

This suggests their brains are affected by inflammation caused by their obesity early in their lives, and are more likely to suffer dementia as they grow older.

The Irish researchers carried out the research because more than half of over 50s in the country are obese.

Almost a quarter of the world will be obese by 2045

And Ireland is a drop in the ocean of a growing global obesity crisis, which researchers have warned will see 22 per cent of people obese by 2045.

One expert said it is ‘desperately sad’ that the health problem is affecting millions of people around the world, with around a quarter of UK adults being obese, as well as about 40 per cent of Americans and 28 per cent of Australians.

One in eight people, rather than today’s one in 11, are also expected to develop type 2 diabetes, the research by Denmark-based pharmaceutical company Novo Nordisk added.

Working to reduce obesity, the Irish scientists suggest, could cut down the financial cost and social burden of people losing intellectual function as they get older.

The findings were published in the British Journal of Nutrition.

WHAT IS THE OBESITY CRISIS?

Obesity now affects millions of people worldwide who are so fat their health is seriously affected and they rack up billions of pounds in health care bills.

Around 40 per cent of American adults are obese, as well as a quarter of people in the UK and about 28 per cent of Australians.

The availability of unhealthy food such as fast food and sugary drinks, as well as a sedentary lifestyle in which people do not do enough exercise, have been blamed for the growing problem.

Obesity increases the risk of people getting lifelong condition Type 2 diabetes as well as a number of life-threatening diseases such as cancer, heart disease, stroke and high blood pressure.

In order to treat obesity the NHS recommends eating a balanced diet and limiting the number of calories people eat, as well as exercising regularly.