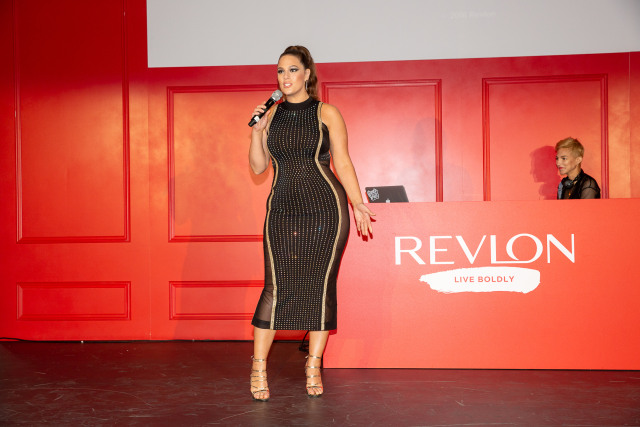 Mass beauty has a growth problem.While prestige beauty is expanding by 6 percent a year, mass is flat, according to Nielsen data. That is the reality the industry confronted at the National Association of Chain Drug Stores annual meeting, which wrapped up earlier this week at The Breakers Hotel in Palm Beach. Top retail and brand executives hammered out strategies to rebuild beauty sales during meetings held poolside, but there was a palpable feeling that neither party is satisfied with the status quo.

Coty’s Shannon Curtin.“This is a pivotal year for the industry. The pace of consumer change and the demand for transparency in beauty is revolutionary,” said Shannon Curtin, senior vice president of North America Consumer Beauty at Coty. “Offline sales growth will come from the combination of sales, profit and experience per linear foot. In the future, experience and value consistency will drive trip frequency in a retailer’s ecosystem.”From a consumer brand perspective, she added, “The brands with the highest growth potential in the future will have a combination of transparency, purpose, consumer connectivity and the ability to deliver unparalleled omni-experiences.”Agreeing that change had accelerated over the past year, Alex Gourlay, the co-chief operating officer of Walgreens Boots Alliance and president of Walgreen Co. (and also outgoing NACDS chairman), said that retail needs to help expose consumers to the wide choices and products offered by the drugstore industry. Picking up his cue, incoming NACDS chairman Mark Panzer, senior vice president, pharmacy, health and wellness at Albertsons Cos., said retailers need to harness the power of the “better tools, better data and better analytical skill” to keep up with the rapidly evolving retail environment.Speed hasn’t always been endemic to the mass market. But during the meeting, retailers and manufacturers pledged to act with newfound alacrity. In beauty, that means moving faster to stock products with healthier ingredients, wider shade ranges for consumers of all complexions and breakthrough innovation versus me-too versions of prestige launches. In-store environments also need a facelift, including implementation of technology in the beauty aisles such as a mirror Coty just revealed at a Paris Bourjois boutique. Once a customer picks up a lipstick, the mirror registers it for virtual experimentation.

Timothy Kaiser, Stefano Curti and Eric Weeks of Markwins.“Elevation of the shopping experience is a main theme,” said Stefano Curti, global president of Markwins Beauty Brands. That will be achieved, he said, through technology and better design with a goal to allow the staff more time to interact with shoppers versus stocking shelves.Reflecting the movement to be in more in sync with contemporary shoppers was evident from the start of the NACDS gathering. As usual, Revlon kicked off the weekend with a cocktail party touting its Live Boldly campaign headlined by ambassador Ashley Graham. “I was told I was never going to have a beauty campaign because of my size,” said the model. “Revlon changed the game and they are about being authentic, about diversity and creating change. They challenged the beauty industry to look beyond the norms.”

Ulta’s Dave Kimbell, Monica Arnaudo and Paul Desiderioscioli.Additionally, two initiatives incorporating inclusivity made headlines at NACDS. They were:New Voices Fund: Sundial Brands and Unilever officially launched the $100 million New Voices Fund to help emerging brands, especially those developed by women of color. “We wouldn’t be standing here today if we hadn’t gotten the access and opportunity,” said Richelieu Dennis, Sundial Brands founder and chief executive officer. About 10 to 12 companies are currently being funded or are at the seed stage as part of the New Voice Fund with “some pretty interesting things,” said Dennis. He noted that Ulta Beauty and Emerson are among the key players interested in partnering with the fund. According to Sundial, women of color secure an average of $36,000 in venture capital funds; more than $1.3 million of funding on average goes to male run firms. Two female entrepreneurs who had benefitted from the initiative, Beatrice Feliu Espada, the founder of the Honey Pot, a natural feminine care brand now sold in Target, and Melissa Butler, the creator of the Lip Bar, a vegan, cruelty-free and wide shade range of cosmetics, discussed how New Voices has helped them overcome obstacles.

Melissa Butler of The Lip Bar.WE: After discussions at industry events, a coalition of female executives formed an organization called WE based on three pillars: advancing women’s voices in the industry; shaping the next generation through mentorship, access and conversation, and enhancing health and wellness. The cornerstone is to provide resources for women working in the industry, but there can also be benefits reflected in the retail environment from more female leadership.The next generation of shoppers, who are often young and multicultural, is exactly the audience mass marketers need to attract, attendees interviewed by WWD said. Major chains such as Target, CVS, Walmart and Walgreens are accomplishing the goal with smaller and nimble niche brands, along with exclusives created just for them.

Shawn Townzen and Jody Pinson of Walmart.Target just added eight multicultural lines to select stores, Walgreens Boots Alliance has youthful brands including Sleek Makeup and CYO in many doors and Walmart is going all in on items only found it its beauty departments. Among those right now are a Vitamin C Brightening Facial Oil Stick from Physicians Formula. Walmart also has added NYX Professional Makeup to 1,000 of its stores. The future, experts said, will involve more exclusives from brands created just for specific retailers along with efforts to offer forms of personalization. That puts further strain on heritage brands who are already struggling to keep up with emerging indies.“A number of the retailers, especially drug and Target, are expanding their offering of these in order to differentiate themselves, and that’s putting a lot of pressure on the big brands,” said Wendy Liebmann, the founder and ceo of WSL Strategic Retail. But she added that larger brands are trying their best to be more innovative, often acquiring smaller brands as in the case of Unilever and L’Oréal. “But still, it’s tough for the big heritage brands that still dominate the wall.”

Norman de Greve from CVS.Retailers noted they see flickers of improvement from efforts of the established cosmetics brands to be more inclusive with more modern messages such as Cover Girl’s “I Am What I Make Up,” campaign. Branded manufacturers also discussed how private labels are eroding their share and stealing their space. That point was elevated by news Walgreens just launched a pilot program that lowers stockkeeping unit count by at least 20 percent. The good news, as noted by Walgreens’ executives, was that cosmetics are not as impacted as other areas in the store. Other chatter at the cabanas was how to generate greater traffic, especially in drugstores.With global sales estimated to be approaching $1 billion, Markwins Beauty Brands believes it has a formula to drive shoppers. The company can act like a nimble indie, yet has the resources, especially in manufacturing of a mega-player. Under the leadership of Curti, who assumed the role as global president at Markwins Beauty Brands three months ago, the company has a multipronged approach to accelerating mass-market volume including a new internal incubation program that is working on at least four launches. That adds to its existing lineup that is clicking on all cylinders. “Last year, Wet ‘n’ Wild was one of the, if not the, fastest-growing cosmetics brands in the United States, growing at 15 to 16 times the rate of the market. Physicians Formula has become the number-one brand recommended by allergist,” Curti said. New packaging is in the plans for the line, along with leveraging the success of its its Rosé All Day Oil-Free Serum to build out a broader lineup. Curti added the marketing budget has been quadrupled for the brand including digital, social and print. Black Radiance, he noted, is a leader in the ethnic cosmetic market. The portfolio is rounded out by the Smackers franchise that is getting a modern overhaul and is expected to get a boost from the closing of Toys “R” Us as shoppers look for outlets stocking youthful beauty products.Other news from NACDS included:

Ingrid Jackel and Geri Lieberman of Yes To.*Yes To has its eyes on gaining additional placement in stores and has a pipeline brimming with innovation spreading into body- and hair-care categories slated to debut in the fall. Company chairman Ingrid Jackel also talked up the appeal of single-dose masks as an entry point to court younger consumers.*Maesa is developing more proprietary launches for a variety of retailers. “Everybody is interested in proprietary brands,” said Julien Saada, ceo and cofounder of Maesa. One area primed for growth, he said, is the value channel where the company is getting requests to create lines that can be available day in and day out, rather than just offering closeouts from national lines.*Natural, plant-based feminine care is a thing, according to the Honey Pot founder Beatrice Feliu Espada. After struggling with an infection, she formulated a natural alternative now sold in Whole Foods and most recently hit 1,000 Target stores. “I want to be the next Sundial,” she said.*Oral care is part of the beauty business, too, according to Craig Dubitsky, the founder of Hello. The company now offers an Activated Charcoal Flouride-Free whitening toothpaste with fresh mint and coconut oil, two ingredients commonly used in beauty.*Bricks-and-mortar isn’t going away, especially for beauty. That thought was hammered home by journalist Peggy Noonan, the keynote on the opening business day. “People want to go into a store to shop. It is human. The Internet can’t touch you or tell you that you look lovely in that dress.”*The NACDS’ Retail Advisory Board can be valuable to building beauty sales, according to NACDS president and ceo Steven C. Anderson. Of note, he said, the association has a wealth of information on Millennials and Generation Z.*Health care has no boundaries, according to Candace Corlett, president of WSL Strategic Retail. “Shoppers want everything they buy to help them be healthier with higher energy — from their beauty and bottled water to their vacations and vitamins. They really like their busy lives, and they understand wellness, but they want short cuts, quick fixes, easy everything. That’s what the competitive advantage is today.”